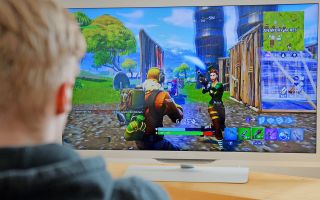 Kids are having a hard time putting down their game controllers when inside the world of "Fortnite."
(Image: © Alamy)

Being a child psychologist and a father, Randy Kulman is no stranger to video games popular among kids. But a few months ago in his office, after four teenagers in a row mentioned "Fortnite," he started wondering if he was dealing with something new this time.

In the following weeks, more kids and their concerned parents proved his hunch, and so did the numbers. "Fortnite: Battle Royale" is indeed the most popular game in the world right now. The fast-pace survival game, in which 100 players are dropped onto a colorful island and fight until only one remains, has over 40 million active monthly players, and its videos are the most watched on YouTube and the streaming platform Twitch. Likened in the New Yorker to Beatlemania and the viral Tide Pod challenge, "Fortnite" has become a social phenomenon engulfing children and adults alike, including Major League Baseball players, whom you might have seen breaking into the game's dances (called "emotes") on the field.

Child psychologists are seeing a version of this frenzy playing out in their offices. "It's quite the phenomenon among kids in my practice," said Kulman, who is the clinical director of South County Child and Family Consultants in Wakefield, Rhode Island. Their patients, Kulman and other psychologists described, are obsessed with the game, and some have played it several thousand times. Many have a hard time putting it down and play through the night, hidden from their parents ― some even throw violent tantrums when parents take their console away. A number of teens have been brought to the psychologists because their school performance has dipped and their interest in social activities in the real world has declined. [7 Ways to Short-Circuit Kids' Mobile Addiction]

All of these behaviors are signs of a problematic relationship with video gaming, driving parents and teachers to ask if they are losing the children to "Fortnite." But kids' obsession with video games has a history: So is Fortnite just having a moment, or is it more addictive than previous games?

What's behind the draw of 'Fortnite'?

Although "Fortnite" is immensely popular, some psychologists note the obsessive behaviors associated with it are nothing new.

"I do see a similar pattern among the patients in my practice," said Emily Gifford, a clinical psychologist in Westchester, New York. Some of her "Fortnite"-obsessed patients, too, are struggling to manage their time and are constantly fighting with their parents about when they can get back on the game. "That said, I'm not sure I can say that, statistically, I am seeing the pattern with any greater frequency or sense of urgency than I have with other video games that came before it."

Still, there are several qualities to "Fortnite" that may have led to its widespread popularity, the experts said.

In "Fortnite," players scavenge for weapons and resources, build structures and defeat other players. By combining elements of shooter games and building games like "Minecraft," "Fortnite" is able to attract players with a wide range of interests.

"Taking what I hear from my patients, 'Fortnite' does seem to fill a void in the current video-game selection," Gifford said. "There was, on one end of the continuum 'Minecraft' and, at the other end, 'Call of Duty.' 'Fortnite' is a third-person shooter game with a social component along with building and strategizing."

These features, as well as a cartoonish style that makes violent moments less jarring, make "Fortnite" more attractive to parents who must decide which games their kids can play. "It seems to offer a middle ground, perhaps where parents are more comfortable saying OK, rather than drawing a hard line in the sand about a more aggressive game," Gifford said. [25 Scientific Tips For Raising Happy (& Healthy) Kids]

And once inside the world of "Fortnite," it's easy to want to stay. Unlike progression-style games that follow a predetermined storyline, "Fortnite" is designed in "sandbox" style, allowing players to roam freely and explore every corner of an open virtual world. "The sandbox games tend to engage kids for longer and longer periods of time," Kulman said. "And in 'Fortnite,' if you lose you can just come right back in."

"Fortnite"games also involve chance, and they're short — typically less than 20 to 25 minutes. So after getting close to winning, it's highly tempting to give it another try, similar to playing a casino slot machine. This is yet another feature of the game that makes it hard to put down, Kulman said.

While some children manage to find a balance between video games and other activities, others may need help. "Game addiction is not a formal diagnosis. However, children and adolescents with certain diagnoses or personality styles might find it more challenging to limit their time," Gifford said.

In general, a healthy gaming diet would include no more than 40 minutes a night on school nights and no more than an hour a day on weekends, said Dr. Leonard Sax, a family physician and psychologist in Exton, Pennsylvania, and author of "Boys Adrift" (Basic Books, 2016) and "The Collapse of Parenting" (Basic Books, 2017).

"That adds up to 6 hours a week. If you spend 6 hours or less playing games, research suggests it doesn't impact school performance or real-world relationships," Sax said. "But if you spend more, and there are many who play 20 hours a week, then you're more likely to see an impact."

Some parents appear to be more forgiving with "Fortnite" compared with other options, because the game seems to tackle several mental skills, such as organization, planning and fast reactions. But Kulman noted that skills improved upon in a game would not automatically transfer to the real world, at least not without guiding the children to identify those skills and learn where they apply to real-life situations.

Similarly, the option to team up with a handful of other players requires teamwork and collaboration — another attractive idea to parents. But collaborating in the game is unlikely to result in better real-life social skills. [The Best Coding Toys for Kids]

"Parents tell me, 'My kid is learning to collaborate, isn't this a useful skill?' The short answer is, 'No, it is not,'" Sax said. "Collaboration in the real world is about listening to your colleague, making eye contact, understanding what they are trying to say and working creatively together."

In contrast, collaboration in "Fortnite" is focused on a narrow objective, which is to defeat others. "Killing people is not fundamentally a social skill," Sax said.