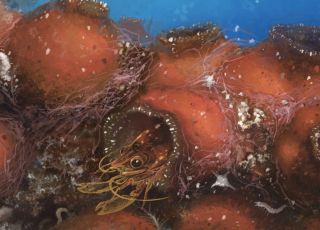 Scientists have discovered a new species of "hobbit shrimp" that shares more than a feature or two with the protagonist of J.R.R. Tolkien's 1937 children's fantasy novel.

The diminutive size and eight hairy limbs of the critter, dubbed Odontonia bagginsi, recall Bilbo Baggins, the reluctant halfling hero who found a magical ring, dueled giant spiders and plundered the hoard of a centuries-old dragon in Tolkien's "The Hobbit," according to Werner de Gier, a biology student at Leiden University in the Netherlands, and his supervisor, Charles H. J. M. Fransen, a shrimp researcher at the Naturalis Biodiversity Center.The duo recently described their finding in ZooKeys, a peer-reviewed, open-access scientific journal.

Instead of hiding out in a hole in the ground, however, O. bagginsi lives inside tunicates — marine invertebrates colloquially known as sea squirts — that have sac-like bodies and pairs of tubular openings, called siphons, that draw in or expel water, the researchers said. [Star Struck: Species Named After Celebrities]

De Gier and Fransen collected the shrimp on an expedition to the Indonesian islands of Tidore and Ternate in 2009. They believe the crustacean has adapted fully to living inside the cavity of its host, which explains the shrimp's small and smooth body.

Like the rest of its genus, O. bagginsi does not typically get bigger than a centimeter (less than a half inch) in length. It dwells in rocky coral at a depth of about 90 feet (27 meters), according to de Gier and Fransen.

The Bilbo Baggins shrimp joins an exclusive club of species named for Tolkien characters, including the cave-dwelling harvestman Landumoema smeagol (Sméagol was Gollum's real name), the golden lizard Liolaemus smaug (after the aforementioned dragon) and the subterranean spiders Ochyrocera laracna and Ochyrocera ungoliant.("Laracna" is the Portuguese moniker for Shelob, the primordial arachnid that stung Frodo, Bilbo's cousin, in "The Lord of the Rings: The Two Towers," and Ungoliant was Shelob's equally terrifying mother).

But even geeking out, it appears, has its limits. When De Gier and Fransen described a second species of shrimp, a close relative of O. bagginsi, they took a more traditional approach to naming it. They dubbed it Odontonia plurellicola, for the species of tunicate from which they first extracted it. Perhaps Frodo was too obvious?

"Being able to describe, draw and even name two new species in my bachelor years was a huge honor," de Gier, who is currently writing his graduate thesis, said in a statement. "Hopefully, we can show the world that there are many new species just waiting to be discovered, if you simply look close enough!"