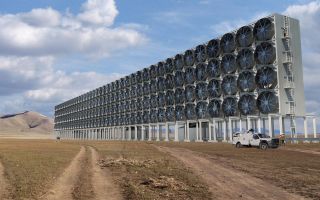 A conceptual drawing of the carbon-capture system. This unit would be one of many that would capture 1 million tonnes of carbon per year.
(Image: © Carbon Engineering)

Scientists say they've developed a new technological solution to the climate crisis: an affordable method for sucking carbon dioxide out of the atmosphere to turn it into gasoline. But how does this process even work? And is it really a magic-bullet solution to climate change?

According to the researchers, the new technique would cost between $94 and $232 per metric ton. As Robinson Meyer, who first reported the story over at The Atlantic, reported, that figure is between 16 and 39 percent of what researchers expected this technology would cost back in 2011. It's cheap enough, he wrote, that it would cost just $1 to $2.50 to remove from the atmosphere the carbon dioxide released by burning a gallon of gasoline in a car. [The Craziest Climate Change Fixes]

Carbon dioxide is a major greenhouse gas and a key driver of climate change (though not the only one). So the prospect of sucking CO2 right out has potential to help abate climate change. Even if that CO2 gets released again when the gasoline is burned, no new greenhouse gas gets pumped into the sky; the researchers pitch it as a kind of recycling for greenhouse gas emissions.

The researchers were a team from Harvard University and a new company set up for this project called Carbon Engineering. They wrote in their paper, published Thursday (June 8) in the journal Cell, that their innovation isn't the development of any brand-new system for carbon capture, or pulling CO2 out of the atmosphere. Rather, they said they're figuring out how to build and power an industrial-scale plant affordably. Meyer gave his article on the paper, which went viral, an eye-catching headline: "Climate Change Can Be Stopped by Turning Air Into Gasoline."

As the researchers described in the paper, turning atmospheric CO2 into fuel is basically a four-step process:

The actual process is pretty complicated, but it all comes down to those four steps. And a lot of that is basic chemistry. Mixing CO2 into a liquid, for example, is just a matter of exposing lots of air to a strong base, or something with a pH much greater than 7. In this case, the base is a solution made up of water, ionic hydroxide, carbon trioxide and potassium. CO2 is acidic, so it will separate from the air in order to mix itself into the basic liquid, the researchers wrote.

The most difficult part of the whole process, the researchers wrote, is sourcing the materials for the factory so that this chemical reaction can happen at a large scale. For the process to be cost-effective, they wrote, the researchers have to be able to pull it off without the massive costs of designing and constructing all-new factory parts. For it to be actually good for the environment, the emissions involved in building or powering the factory can't be so significant that they wipe out the factory's carbon benefits.

The researchers said they pulled all of that off by designing a factory based entirely on parts that suppliers could already make cheaply, by powering their prototype factory using natural gas, and by keeping careful track of their emissions and costs and each stage of the design and production process. (Natural gas is a fossil fuel, but it releases far less in the way of greenhouse gases when it burns than, for example, gasoline or coal.

Is this a good idea?

The researchers noted that if their factory were run only for the purpose of pulling CO2 out of the atmosphere and not making fuel that would release it again, it could permanently sequester 90 percent of every ton of CO2 it sucked in. But it's worth taking a serious look at the costs involved.

In 2017, the world emitted about 32.5 gigatons of carbon dioxide. If this technology were built at a scale to suck all that back out of the atmosphere at $93 to $232 per ton, simple arithmetic indicates that the total cost would be between about $3.02 trillion and $7.54 trillion.

Experts have already raised significant objections to the idea that this represents anything more than the illusion of a solution to climate change.

Glen Peters, a researcher at the Center for International Climate and Environmental Research in Oslo, Norway, wrote on Twitter that these technologies obscure the real challenges presented by climate change. Policymakers and journalists assume that some sort of "negative emissions" tech will play a significant role in keeping climate change in check, he wrote. ("Negative emissions" refers to any technology that reduces greenhouse gases in the atmosphere, rather than increasing them.)

He pointed to a paper published in the journal Environmental Research Letters in May that found that (assuming costs between $100 and $300 per ton for direct-air-capture plants like the one from Carbon Engineering) no single technology is likely to actually suck enough CO2 out of the atmosphere to meet emissions targets. At those prices, the researchers wrote, it will be impossible to build enough negative emissions plants to suck enough CO2 from the atmosphere to meet global climate goals.

Peters also pointed to a commentary he co-authored, which was published in the journal Science in 2016, where he argued against relying on negative emissions, arguing that we still don't know if those technologies will work. (The Paris Agreement, signed that year, assumed that negative emissions technology would be a significant part of reaching global emissions targets.)

"There is a real risk [that people who are working on negative emissions technology] will be unable to deliver on the scale of their promise," he and his co-author wrote. "This is not to say that [negative emissions technologies] should be abandoned. They could very reasonably be the subject of research, development, and potentially deployment, but the mitigation agenda should proceed on the premise that they will not work at scale. The implications of failing to do otherwise are a moral hazard par excellence."

In other words, if these things turn out not to work, and we bet the Earth's future on them, we might all regret it.