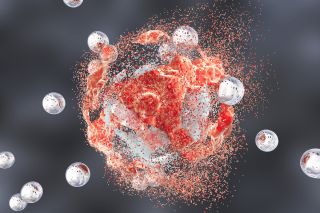 The 'executioner protein' MLKL chews through its own cell membrane during the cell suicide program called necroptosis.
(Image: © Shutterstock)

Bobbing through your body's cells, there is a mild-mannered protein named MLKL anxiously awaiting the chance to kill.

Scientists have previously implicated MLKL as the ax-wielder in a form of cellular death called necroptosis — a messy sort of suicide in which a cell deliberately spills its guts to warn other cellsabout potential viral invaders. When such a threat is detected, a long chain of alarms sounds inside the cell, ultimately awakening MLKL from its peaceful slumber. Then, like a Viking berserker, MLKL bursts through its own cell membrane, killing itself and the rest of the cell it came from.

Jan Carette, an assistant professor of microbiology and immunology at Stanford University, justifiably calls MLKL "the executioner protein." But according to Carette, MLKL does not act alone. Like a teeny-tiny Manchurian candidate, MLKL is actually harmless until a mysterious accomplice whispers a secret pass code in MLKL's ear, thus turning the sleepy protein into a cold, cell-shredding killer. [5 Ways Your Cells Deal With Stress]

"This was a big surprise — we didn't know that the killer protein required a code," Carette's colleague Cole Dovey, a postdoctoral scholar at Stanford and lead author of a new necroptosis study, said in a statement. MLKL is "held in check by a code, and it's released by a code. So only when the code is correct does the killer activate, puncturing holes in the cell's membrane as it prepares to burst the cell open."

In the new study published today (June 7) in the journal Molecular Cell, the researchers levy an accusation at the sneaky molecule they think is responsible for transmitting this "death code." And it goes by the alias IP6.

In their new study, the Stanford researchers looked for the executioner protein's accomplice by taking a genome-wide screening of all the molecules involved in human cell death. The team induced necroptosis in a line of lab-grown human-derived cells to see which genes and their corresponding molecules were most active toward the final phases of necroptosis.

Across numerous tests, one family of molecules caught the team's attention again and again: inositol phosphates, or IPs, which are known to be involved in numerous cellular functions, including growth and death.

To examine the IP family's role as the executioner's assistant, the team used CRISPR gene-editing tools to create mutant cells in which IPs were blocked from being activated. When these mutant cells were intentionally infected with a herpes virus — which would normally set off the cell's intruder alarms and initiate necroptosis — the cells refused to die.

The new knowledge could have big implications for the treatment of conditions like Crohn's disease, which are caused, in part, by erroneous necroptosis. If scientists could develop a drug that prevents IP6 from binding with MLKL, it could prevent cells from initiating necroptosis when they really shouldn't.

"In terms of drug discovery, [IPs] have been somewhat ignored, so we're really excited to be able to look into these small molecules for potential therapeutic reasons," Carette said.

He and his team have already begun ramping up their studies into the structure of IP6.