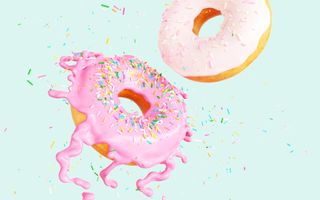 (This is not what the flying doughnuts actually look like.)
(Image: © Shutterstock)

Scientists have figured out how to make doughnut-shaped pulses of light. And, no, you can't eat them — but this is a big deal for at least three other reasons:

Every electromagnetic wave that's ever been created can be described using an equation, if we know its position in time or space, said Nikitas Papasimakis, one of the theorists behind the discovery and a physicist at the University of Southampton. [The Mysterious Physics of 7 Everyday Things ]

For instance, an electromagnetic pulse shaped like a sine wave, like the one illustrated below, looks more or less the same 5 seconds after it appears as it does 30 seconds after it's appeared (or, say, 5 or 30 feet from where it appeared). To describe it, you only need to know its position in time or space.

"Flying doughnuts" are also waves; they're part of a class of special, theoretical waves first proposed in 1996 (which also include something called "focused pancakes") that are so weird and complex that, in order to work, the equations describing them require knowing the waves' position in both space and time, Papasimakis told Live Science.

If scientists generated a flying doughnut in the real world, it would be the first time humans ever created such a complicated wave.

Besides bragging rights, scientists want to create these waves for a more practical reason, so they can start to understand a weird behavior sometimes seen in matter, Papasimakis said.

In fact, a great deal of Papasimakis' recent work has focused on this strange behavior of matter. Under certain circumstances, matter gets electromagnetically excited. Scientists have a good understanding of the more common versions of this effect, like the two-ended magnets you stick on your fridge. But there's a less common version, the "toroidal magnetic excitation" — basically a doughnut-shaped, magnetically excited area within a chunk of matter — that is governed by physics that scientists are still figuring out.

It's not very well-studied, Papasimakis said — in part, because the effect is so weak.

In order to generate a flying doughnut, scientists will need to build a special material that's essentially made up of a series of carefully arranged antennas, according to Papasimakis and his colleagues' paper, published May 23 in Physical Review B. The antennas could be different sizes and distances apart, depending on how big a doughnut you were trying to generate, he added.

The next step, he said, is to actually build one of these arrays and fire off a flying doughnut in real life. He and his colleagues, he said, are already working on it.