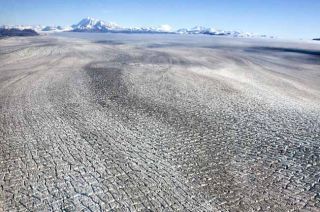 Bering Glacier viewed from 1,500 ft. above the ice. The highly fractured surface is the result of stretching and shearing. New fractures produce "icequakes" that register throughout the area. Once open, these pathways allow melt water to flow through the glacier.
(Image: © Chris Larsen)

Up to thousands of "icequakes" may shake a glacier a day, rumblings that could shed light on how climate is changing.

Just as volcanoes involve magma interacting with rock, so too do glaciers often involve interplays between water and ice. As such, giant events within glaciers can occur, with icequakes in Antarctica known to reach the force of a magnitude 7 earthquake.

To learn more about icequakes, scientists in Alaska used equipment and techniques normally employed for monitoring seismic events to investigate the Bering Glacier, which flows from the St. Elias mountain range to the south-central coast of Alaska. Ice in this temperate glacier is near its melting point, leading to a history of dramatic surges.

In the spring of 2007, researchers deployed five monitoring stations a mile or so apart from each other on the glacier. The area proved extraordinarily active, generating 160,000 seismic events over the course of some two months in both the shallow and deep portions of the ice, with an average of one event roughly every 30 seconds.

"A huge number of pops and creaks are occurring all of the time in glaciers," said researcher Michael West, a seismologist at the University of Alaska at Fairbanks. "Something as simple as a warm afternoon or a rainstorm has a direct and almost immediate influence on a glacier that can be tracked by listening to the creaks and groans that the ice makes."

As spring kicked in and melting began in force, the glacier went from quiet to loud.

"I compare it to a bear groaning as it emerges from hibernation in the spring," West said. "These results give us a time frame for how long it takes the glacier to come back to life after a relative winter repose. More importantly however, it provides an example of how the same techniques could be used over several years to map long-term changes."

Just as seen with volcanoes, there were quakes that shook the glacier back and forth at relatively high frequencies as well as others that made the ice shudder at low frequencies. A third class was seen as well — hybrids that were high- and low-frequency in rapid succession.

When it comes to volcano-linked earthquakes, high-frequency events are often thought to result when pressure from a pool of magma causes solid rock to crack or slip, abrupt motions that send out pulses of waves.

Hybrid icequakes suggest a link between how low- and high-frequency quakes work. The researchers suggest pressure from water pooled on the surface might drive existing cracks to pop wide, leading to a burst of high-frequency shaking from this cracking followed by extended low-frequency rumbling due to water gushing into the new opening.

By tracking icequakes over months and years as well as across different types of glaciers, one could pin down what causes different kinds of quakes, the scientists suspect. Once the cause is deciphered, further seismic monitoring of glaciers could then reveal if the icequakes are changing over time — due, say, to season or climate — and explain why.

In a way, West said, these creaks and pops are like "the pulse of a glacier." Future research could help scientists monitor the health of glaciers as doctors would patients, he noted.

"The primary challenge is that glaciers are extremely challenging places to install equipment," West said. "While the highest resolution data probably comes from instruments installed directly in the ice, we may have to carry out long-term observations using instruments installed on the bedrock adjacent to glaciers. It is doubtful that in-ice installations will ever be able to run consistently for many years. Since glaciers flow, the stations are always moving!"

West and his colleagues detailed their findings in the April issue of the journal Geology.