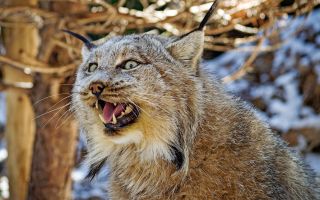 This fight, captured on video by passerby Edward Trist and shared on Twitter by the website Globalnews.ca, is truly strange to watch and listen to. And Luke Hunter, chief conservation officer for Panthera, the global wild cat conservation organization, said the spat is almost certainly about sex.

"Canada lynx, due to their harsh winters, are highly seasonal breeders, and this is right at the end of their usual breeding period," Hunter told Live Science.

Lynx breed mostly in the spring, finishing up in April or sometimes May, Hunter said. By summer, the females settle down to give birth, and any lynx that haven't bred have missed their shot. That means, he said, this is a time when lots of male and female lynx are out on the prowl, looking for that last shot at mating and the opportunity to parent a litter of kittens. And in this case, all those aroused feelings likely led the two animals to face off, he said.

"This is an amazing vocalization I've never heard from Canada lynx," Hunter said. "But it's basically the same thing [as in house cats] — this sort of very screechy vocalization that shows stress and is designed to intimidate the other animal." [20 Weird Dog and Cat Behaviors Explained by Science]

It's impossible to tell from the video whether these two lynx are male or female, Hunter said, though their heavier, more tufted heads do suggest that both are male.

"In that case, these two animals have encountered one another, probably while looking for females," he said. "So then it's exactly what's happening in back alleys in New York City and Ontario with feral, stray cats. It's the same sort of caterwauling."

It's possible, however, that the two animals in the video are females or, perhaps more likely, a male and a female, Hunter noted. And certain behaviors in the video lead Hunter to suspect it's the latter.

"They're sort of standing off from each other, and both are doing their best not to escalate," he said.

That's the sort of encounter that would be typical between a female lynx and a male lynx that's trying to mate with her when she's not interested, Hunter said, adding that it's the sort of thing that would make sense right now, at the end of breeding season, when the window for breeding has likely closed.

"They're both in this situation where, Canada lynx are mostly solitary — they're mostly not interacting with other adults — and so there's a danger to the encounter," he said. "They're engaging in a ritualized way of trying to assess whether the other party is dangerous, whether it's a mating opportunity, because you don't want to rush in and start a fight."

Canada lynx — part of a genus of cats that includes bobcats as well as the larger Eurasian and Iberian lynx — are much smaller than big cats like mountain lions and leopards. But at around 20 lbs. (9 kilograms), they're "about the size of a border collie," Hunter said, and they're plenty capable of doing serious damage to one another. Neither cat in the video wants to risk that.

"All the vocalization and movements are designed to ... defuse the possibility of real danger," he said.

One interesting moment in the video, Hunter said, was when the lynx knocked their heads together before leaping apart. "I've never actually seen that with cats in a scenario like this," he said.

That leads him to suspect that it's an encounter between a male and a female. "Just like in domestic cats, a head butt is usually an affectionate gesture," Hunter said.

Domestic and wild cats do it with creatures they're familiar with.

"I'm guessing what might be going on there is that, in this scenario, the endorphins and the adrenaline is surging, and it might be an attempt to be a little friendly, to defuse the tension," he said. "They're both torn; they're both conflicted. They're both in a dangerous situation where they're not sure of the other's intentions. They're both willing to maybe make a conciliatory gesture. But when they actually touch, that's really scary, and they back off and nearly get into it."