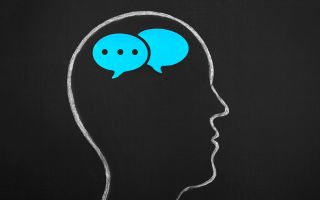 Pauses in conversation are more likely to happen before nouns than before verbs.
(Image: © Getty Images/iStockphoto)

If you pay closer attention to those moments when an "um" an "uh" or an awkward pause inserts itself into your conversation, you may notice that the flub usually comes just before a noun, according to a new study.

Researchers found that when people are midsentence and a word is pronounced more slowly, or seems just beyond their grasp, that word is more likely to be a noun than a verb. This might happen because visualizing nouns before we say them temporarily slows our speech, while action words like verbs require less time to "see" in our minds before they leave our mouths, the study authors said. [10 Mysteries of the Mind]

The complex interaction of various factors shapes the speed of a person's speech, and these factors include the frequency and familiarity of the words used, the researchers wrote in the study.

In fact, scientists have previously observed that pauses preceding unfamiliar or complicated words reflect the comparative difficulty of planning those words, lead study author Frank Seifart, a researcher with the Department of Literary Studies and Linguistics at the University of Amsterdam in the Netherlands, told Live Science in an email.

For the new study, the researchers analyzed thousands of speech recordings, listening for the rhythms of 288,848 words in total, from phrases in nine diverse languages spoken in Europe, North America, Mexico, Siberia, the Himalayas, the Amazon rainforest and the Kalahari Desert.

In all nine languages, the scientists found that pauses — whether silent or "filled" with a placeholder sound — were 60 percent more likely to occur before nouns than before verbs. The researchers further found that people were twice as likely to hem and haw before saying a noun than they were before uttering a verb, even if the verb was complex or unfamiliar.

In common speech, nouns are typically used only when they add information that is new or unexpected; otherwise they are frequently omitted or replaced with pronouns, the researchers said. Therefore, people need more "planning time" to say nouns than verbs, even when the nouns in question aren't particularly complicated, the researchers noted in the study.

Their findings suggested that even though the languages demonstrated significant diversity in grammatical structure and cultural context, certain speech rhythms persistently followed strong universal patterns — and those patterns can be linked to the use of nouns or verbs, Seifart said in the email.

The findings were published online May 14 in the journal Proceedings of the National Academy of Sciences.