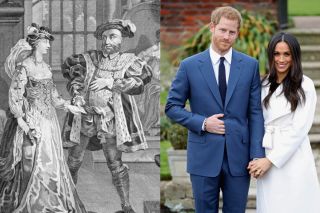 The British monarchy's come a long way, baby. Tomorrow (May 19), Prince Harry will wed an American divorcée, Meghan Markle, to the well-wishes of his family … on the anniversary of the day that a king of England once had his controversial wife beheaded.

May 19 was the execution date of Anne Boleyn, the second of the six wives of King Henry VIII, as pointed out by The Washington Post.

Boleyn was executed in 1536 at the age of either 28 or 35 (there is historical debate about whether she was born in 1501 or 1507). The charges against her were incest, adultery and plotting against the king's life — charges widely viewed by historians as trumped up by Henry VIII to clear the way for his third marriage to Jane Seymour. [Family Ties: 8 Truly Dysfunctional Royal Families]

Desperate for an heir

For much of his reign, Henry's overwhelming concern was securing an heir to the throne. His first wife, Catherine of Aragon, was his brother's widow. She became pregnant at least seven times during her marriage to Henry, but most of her pregnancies ended in miscarriage or stillbirth. Only one child survived past early infancy, a girl, Mary, born in 1515. [10 Wedding Traditions from Around the World]

Enter Anne Boleyn. One of Catherine's ladies-in-waiting, she caught the king's eye around 1526 but refused to become his mistress, as her sister had. Instead, Boleyn held out for the real prize — the title of queen. Henry asked Catherine to quietly retire to a nunnery and allow her marriage to be annulled; she refused. Henry turned to the pope for the annulment, but years of negotiating and petitioning failed. Ultimately, Henry's marital troubles led to the separation of the Church of England from the Catholic Church in Rome, and Henry got his divorce.

The end for Anne Boleyn

He also got his marriage to Boleyn. Unfortunately, Henry and Boleyn had no more luck at producing a male heir than Henry and Catherine had. Boleyn's first child, a girl named Elizabeth, was born in 1533. But no boys were forthcoming, and in 1536, Boelyn had a miscarriage of her own. (She may have had one or two more miscarriages between Elizabeth's birth and that loss, but historians aren't certain.)

By this time, Henry had a new paramour in Seymour. Boleyn was arrested and taken to the Tower of London, accused of adultery with several noblemen, a court musician and even her own brother. According to an eyewitness, manservant George Constantine, Anne Boleyn's own uncle, the Duke of Norfolk, read out her sentence: to "be burned here within the Tower of London on the Green, else to have thy head smitten off, as the King's pleasure shall be further known of the same."

According to the chronicle of Thomas Wriothesley, the First Earl of Southampton, Boleyn was led out on the green of the Tower of London at 8 a.m. on May 19, 1536. She gave a short speech in which she called the king "the most godly, noble and gentle Prince that is." Her last words were, "To Jesus Christ, I commend my soul." She was then decapitated by a swordsman specially called in from the English holding of Calais for the task. According to biographer Eric Ives in "The Life and Death of Anne Boleyn," (Wiley-Blackwell, 2005), this was a merciful execution by the standards of the day, allowing Boleyn to kneel upright rather than putting her head on a block for decapitation by axe.

There was an ultimate irony in Henry's desperation for a male heir and his dismissal of Anne Boleyn: His child with Boleyn would become one of the most famed monarchs in English history. Elizabeth I would ascend the throne in 1558, after the early death of her half brother, Edward (Seymour's son, who succeeded his father in name but died at age 15), and the bloody reign of her half sister, Mary I, Catherine of Aragon's surviving daughter. Boleyn's child would go on to rule until 1603, presiding over the Elizabethan era. She oversaw the defeat of the Spanish Armada in 1588, a period of seafaring exploration and relative wealth in England, and the rise of cultural touchstones, including William Shakespeare.

Fortunately for Markle, who will marry into the House of Windsor tomorrow, the rate of executions in the British monarchy has gone way down. Mary Stuart, the queen of Scotland, died by beheading in 1587, the last female monarch killed that way. The last king beheaded was Charles I in 1649. Markle likely won't have to worry about any Game of Thrones-style maneuvering for her own progeny, either. The British line of succession no longer excludes women, and Prince Harry is sixth in line for the throne, after his father, brother and his brother's three children.