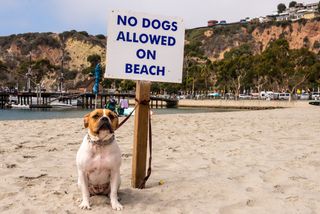 There's a paradox in every command. Tell some people to do something, and they'll be less likely to do it. Restrict their choices, and suddenly all they want is the one option they can't have. This aversion to being controlled is one of the ingrained traits of humans (and cats, obviously) and touches diverse areas of life. It affects whether an employee fulfills the boss's request and whether parents follow health authorities' advice to vaccinate their children, whether diplomatic talks succeed or nations remain in bitter standoff.

But what fuels this impulse? In a new study published today (May 14) in the Journal of Neuroscience, researchers found several factors: People balk at being controlled if they take it as a sign of being distrusted or if they have little understanding about the behavior of the other person who is restricting their freedom.

And looking at the brain itself revealed a surprising factor that may help explain why some people are more control-averse than others, the researchers said. The investigators found that an individual's tendency for control-aversion is reflected in how synced up the activity is in two brain regions. [10 Things You Didn't Know About You]

Control-aversion at its core is not necessarily bad. People value their freedom of choice and benefit from protecting it. But this primal instinct sometimes kicks in for the wrong reasons, and a better understanding of the mechanisms behind it could help people avoid causing a backlash effect, the researchers said. This backlash contributes to noncompliance to medical treatments, disobedience of the law, and even deadlocked political and business negotiations, the researchers said.

"There are many cases in which the society would be better off if we could prevent or reduce control-averse behavior," study investigators Daria Knoch and Sarah Rudorf, of the University of Bern in Switzerland, told Live Science. Take, for example, anti-drug or anti-smoking campaigns, which sometimes inadvertently increase the behavior they are trying to reduce, the scientists said.

There have been studies on how to devise more-effective communication that doesn't turn people away. "But without opening the black box and understanding what goes on in a control-averse person's mind, these studies rely on trial and error," the researchers in the new study said.

The teenager in all of us

In the new study, 51 university students had their brains scanned while they played a trading game in which they divided money between themselves and a peer. In some rounds, the peer could specify a minimum requested amount and therefore control just how freely the participants were to divvy up their assets.

At the end of the game, the participants rated a few items on a questionnaire that was designed to measure how much the participants' decisions were influenced by factors highlighted in previous research. These factors included negative feelings such as anger and motivation to restore one's freedom. Other factors were trust and understanding, which were measured by items including, "When Player A requests a minimum of generosity, he distrusts me and I dislike that," and, "I understand when Player A requests a minimum of generosity." Most people turned out to be quite generous in giving away some of their assigned money. But if their peers requested a minimum, all but 10 participants tended to give less than they normally did, though to varying degrees.

Responses to questionnaires revealed that in the controlled conditions, the more someone perceived distrust or the less understanding they had, the more they reduced the money they gave away. These factors seemed to influence participants' decisions more than how angry they felt or how badly they wanted to restore their freedom.

A third finding from the brain scans complemented this picture further. The participants who were more control-averse showed higher simultaneous activity in the brain areas called the inferior parietal lobule and dorsolateral prefrontal cortex.

"It seems that this connectivity captures something that is not accessible through self-reports. In that sense, our study revealed a missing piece of the puzzle," the researchers said.

The puzzle, however, is still incomplete. The two brain regions have both been implicated in diverse functions. For the inferior parietal lobule, that ranges from mathematical operations to reorienting attention and processing distances to self. And the dorsolateral prefrontal cortex is involved with cognitive control, moral decision-making and resolving conflicts in decisions.

So it is unclear exactly why activity in these two brain regions shows up during control-averse behavior. One interpretation, the researchers said, is that control-averse people perceive a conflict between their general motivation to be generous and their urge to act against restrictions, and that conflict is reflected in these brain regions.

But what makes one person use this network more than another person? It's possible that individuals' variability in brain wiring is at play, the researchers said, but that's something future research needs to find out.