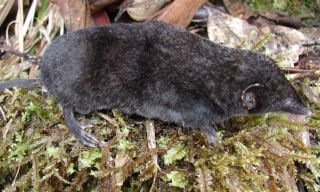 The Palawan moss shrew (Palawanosorex muscorum) lives only on Mount Mantalingahan in the Philippines.
(Image: © The Field Museum/Danilo Balete)

A new species of shrew has been discovered living high on a single peak in the Philippines, and no one knows how it got there.

The shrew, a tiny gray creature with big front feet and an unusually fuzzy tail, probably split evolutionarily from its last relative about 10 million years ago. The mountain it lives on, Mount Mantalingahan on Palawan Island, is no more than 5 million years old.

That means the shrew traveled far to land in its current location, but wait — the new species' closet relatives (which aren't all that close) are found in Africa. [The World's 6 Smallest Mammals]

"The one mountain is the only place that we know of them occurring," said Lawrence Heaney, one of the authors of a new paper describing the shrew and the Negaunee Curator of Mammals at The Field Museum in Chicago. "So one of the questions is, 'Well, how did it get there?'"

Scientists first discovered the shrew in 2007 on an expedition to survey Mount Mantalingahan for biological diversity. Researchers caught multiple specimens of the animals in traps baited with earthworms or fried coconut coated in peanut butter.

The shrew, now dubbed Palawanosorex muscorum, or the Palawan moss shrew, immediately piqued the interest of Danilo Balete, the leader of field surveys for the Philippine Mammal Project and a research associate at The Field Museum.

"I started getting messages saying, 'Oh, we're getting this weird little shrew. We don't know what it is,'" Heaney said.

What makes the shrew weird are its strong front feet and the dark fur covering its tail. Most shrews have tails covered with scaly skin, Heaney said.

The shrew is one of three mammal species endemic to Mount Mantalingahan, meaning they live exclusively in that small geographic region. The other two are the Palawan montane squirrel (Sundasciurus rabori) and the Palawan soft-furred mountain rat (Palawanomys furvus).

"The Philippines, we have gradually come to realize, has the greatest concentration of unique mammalian diversity — the technical term we use is 'endemic diversity' — of any country," Heaney said. [Image Gallery: Colorful Creatures of the Philippines]

The Palawan moss shrew's existence is like a piece to a puzzle that researchers didn't know existed. Because the species predates its habitat (the Philippines are very geologically active, and Mount Mantalingahan didn't rise above the sea until at least 5 million years ago, and possibly only 2 million or 3 million years ago), the creature must not have evolved on the mountain's slopes.

So where did it come from?

"Best guess is that they came in from Borneo," Heaney said. Many of Palawan Island's animals hail from Borneo, the nearest large island. Researchers think there might have once been a land bridge between the two islands when sea levels were lower. The shrew probably needs to live at high elevations to survive in today's climate, but perhaps at some earlier time, climatic conditions were such that the little animal had more leeway to roam, Heaney said.

The only problem is that no one has ever found any close relatives of the shrew on Borneo. If one is there, though, the world may know soon. One of the co-authors of the study, Louisiana State University biologist Jacob Esselstyn, is doing fieldwork in Borneo, searching for shrews.

"They're out there looking for possible relatives of this animal," Heaney said. "So maybe something will turn up."

The research appears today (May 8) in the Journal of Mammalogy.