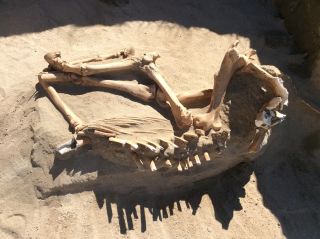 The ice age horse is about the size of a large Shetland pony.
(Image: © Thanksgiving Point)

During the last ice age, a small horse about the size of a Shetland pony somehow trampled into a big lake. It's unclear how the animal died, but its body fell to the bottom of the lake, where it lay buried for about 16,000 years — that is, until this past fall, when landscapers in Utah unexpectedly unearthed the horse's remains in their backyard.

The discovery is a rare one. Horses lived in North America from about 50 million to 11,000 years ago, when they went extinct on the continent before being reintroduced by the Europeans thousands of years later, but it's uncommon to find horse remains in Utah, a state that was partly covered by the prehistoric Lake Bonneville. (This ancient lake has since dwindled, forming several smaller lakes, including the Great Salt Lake.)

It's impossible to know how the horse died, but Rick Hunter, a paleontologist at the Museum of Ancient Life, in Lehi, Utah, who is studying the horse's remains, has several ideas. Perhaps the horse made its way into the lake and then drowned while trying to escape from an ice age predator, such as a short-faced bear or saber-toothed cat, he said. Or maybe the horse died in a stream whose waters emptied into the lake. [10 Extinct Giants That Once Roamed North America]

"We really don't know for sure," Hunter told Live Science.

Though the horse's death will remain a mystery, researchers are excited to study its remains. Utah resident Laura Hill and her husband, Bridger Hill, found the skeleton in their yard in September 2017, after landscapers stumbled across it, according to The New York Times. At first, they thought it was a cow skeleton, because Lehi used to be farmland.

But then, Laura Hill asked her neighbor, a geologist at Brigham Young University, to look at the bones. He suspected the bones belonged to a horse from the Pleistocene, an epoch that lasted from 2.6 million to 11,700 years ago, The New York Times reported.

Just last week, the Hills told the Museum of Ancient Life about the horse. The bones were a little worse for wear; they'd been exposed to the air for about eight months, children had poked and prodded them, and the landscapers' heavy equipment had destroyed the skull, Hunter said.

Even so, it's a prize specimen, he said. Based on the sediment layer where the horse was found, it is likely between 14,000 to 16,000 years old, Hunter said. It's unclear whether the horse was male or female, but it was likely a bit older, given that it had arthritis in its back vertebrae and a bone growth on its right hind leg that looks cancerous, Hunter said.

A quick examination showed that the horse was short and stocky. Its "femur appears to be as bulky as a modern-day horse, but shorter," Hunter said.

He noted that the horse's remains aren't fossilized into mineral like some dinosaur bones are. "This animal isn't old enough yet for that to have happened," Hunter said. Rather, the horse's bones stayed moist in the wet ground for thousands of years. When damp, ancient bones are exposed to the dry air, they can dry too quickly and crack.

To save the bones, researchers can bury them in containers with wet sand and let the water evaporate slowly over several months, Hunter said.

"I've seen mammoth bones in the past that have come out of the ground," Hunter said. "Without doing that [wet sand] procedure, they actually just develop really big splits longitudinally down the bone."

Once the horse's bones are properly preserved, the researchers plan to do more accurate dating on them and determine the species. The Hills still own the horse, because it was found on their land. But the museum is in discussions with them about possibly donating it so that it can go on public display, Hunter said.