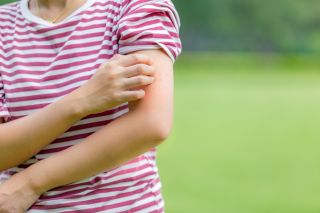 If a bug crawls on our legs, we itch. If a piece of hair falls on our skin, we itch. If mosquitoes bite, we mutter to ourselves — and itch. There's so much itching going on in this world, yet scientists still know very little about how and why this sensation occurs.

For some people, even light touches, such as the slight rubbing of clothes against skin, can cause itching. This annoyance is especially common in older adults and people with dry skin. Now, researchers say they've figured out (in mice) the reason for that reaction. They published their results today (May 3) in the journal Science. (Not all types of itching are caused by touch; itching can also be caused by chemicals or bug bites, for example.)

Itching that's caused by touch — called mechanical itching — is "very irritating" because it can make it difficult for chronic itch patients to wear certain types of clothing, said senior study author Hongzhen Hu, an associate professor of anesthesiology at the Washington University School of Medicine in St. Louis. [How to Fix 9 Common Skin Problems].

By figuring out how the body normally inhibits this type of itching, "we probably can target molecules to control mechanical itch to help improve [people's] life quality."

Currently, there are no anti-itch creams to alleviate such touch-induced itches, Hu added. To investigate why these types of touches itch, the researchers used a device that resembles a piece of hair to poke some young and old mice. The researchers counted the number of times the critters used their hindpaws to scratch the place where they'd been poked (perhaps simultaneously muttering about humans).

The investigators found that the older mice scratched much more than the younger mice did. When the scientists tested other types of causes for itching, such as histamine — a chemical that is released as an immune defense and that causes allergy symptoms — they didn't find any age-related differences.

This led to the big question: What did these elderly mice have that the younger mice didn't — or what did they lack?

Touch receptors populate our skin, feeding information, such as temperature and texture, through long nerve bundles into the spinal cord and up to the brain. The spinal cord is usually responsible for reflexive responses, sending rapid-fire signals back to your hand so that you'll take your hand off the hot stove or slap that creepy crawler off your arm, for example. Those reflex movements precede the perception of pain or itchiness, which come from signals generated in the brain quickly after the reflex response, Hu told Live Science.

The skin is very sensitive, a trait that's meant to protect us from dangers like poisonous bugs and hot surfaces. However, the spinal cord has cells called interneurons that suppress touch information that you don't need to react to, like a shirt touching the skin, Hu said. This prevents you from itching every time you touch something.

But it was unclear what sparked the itching examined in this study and what stopped it. The team had a strong suspicion, though, that specific touch receptors on the outer layer of the skin, called Merkel cells, were the troublemakers, Hu said.

When we put our hands on a table, for instance, Merkel cells allow us to feel the surface's smoothness or roughness, Hu said. They are turned on by a protein called Piezo2, which sits on the edge of the cells. Because these cells live on the outer layer of the skin and are thought to be responsible for sensing light touches, Hu and his team thought these receptors must also be the ones causing us to feel itchy.

"We thought these are the guys who cause the itch, but these guys are not causing itch, [but rather] are inhibiting itch," Hu said. Indeed, with follow-up experiments in genetically modified mice, the investigators saw that activating Merkel cells made the critters scratch less, and inhibiting these cells made the animals scratch more.

The team concluded that the Merkel cells most likely sent information to those spinal interneurons, telling them that those touches were innocuous and therefore didn't warrant an "itch" response. But because this study looked only at the surface of skin, not at the pathways to the spinal cord, more research is needed to be sure about this conclusion, Hu said. Although they now have evidence that Merkel cells help quench touch-induced itching, the researchers still don't know what's responsible for sparking it.

Merkel cells "have fascinated neuroscientists for more than a century," said Ellen Lumpkin, an associate professor of somatosensory biology at Columbia University Irving Medical Center in New York, who was not part of the study. "Although Merkel cells make up only a tiny fraction of cells in the skin, this study adds to a growing body of evidence [indicating that] they play an important role in sensation."

Because the study was done in mice, it's unclear just yet whether the results also apply to humans. But Lumpkin said she thinks they could. "Many of the pathways that trigger bodily senses [are] shared between mice and humans, so it's certainly possible," she told Live Science.

Hu and his team are now working with the dermatology department at Washington University School of Medicine to analyze tissue samples from people who get itchy from light touches.