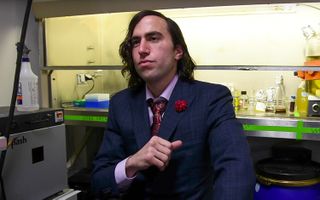 The CEO of a biomedical startup who sparked controversy when he injected himself with an untested herpes treatment in front of a live audience in February has died, according to an email sent to Live Science.

Aaron Traywick, the CEO of Ascendance Biomedical, was found dead at 11:30 a.m. ET on Sunday (April 29) in a spa room in Washington, D.C., according to a statement provided to Live Science by the Metropolitan Police Department (MPD) of the District of Columbia. Traywick was 28 years old.

According to the website News2Share.com, Traywick was found in a flotation tank. Flotation tanks are soundproof pods filled with body-temperature saltwater that are used to promote "sensory deprivation."

The MDP is still investigating Traywick's death, though they note that at this point, they have no evidence suggesting foul play.

Traywick made news in October 2017, when he staged a live demonstration of a purported gene-therapy treatment for HIV, Live Science previously reported. The untested treatment was given to a volunteer named Tristan Roberts who has HIV; Roberts said that one month after the injection, his viral load had risen, not fallen. [11 Surprising Facts About the Immune System]

Traywick and Roberts skirted this law, however, through self-experimentation — they weren't selling the products.

New2Share's Ford Fischer sat down for an interview with Traywick in early February.