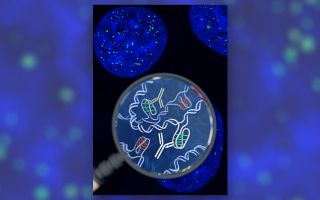 An artist's impression of the i-motifs (shown in white and green) with white, Y-shaped antibodies binding to them.
(Image: © Chris Hammang)

When you think of DNA, odds are, you picture the famous double helix, a ladder-like structure elegantly twisted like a corkscrew.

But DNA doesn't always assume this form. The existence of one shape of DNA in humans, in particular — a four-stranded knot of genetic code — has been controversial among scientists for years. Because this so-called i-motif loves acidic environments (a condition that scientists can create in the lab but doesn't naturally occur in the body), many scientists thought that it couldn't possibly exist in human cells.

But in recent years, studies have pointed to the possibility that this bizarre form of DNA could, in fact, exist in living humans. Now, a new study published today (April 23) in the journal Nature Chemistry provides the first direct evidence that it does exist and that it may play an important role in regulating our genes. [Unraveling the Human Genome: 6 Molecular Milestones]

"Before this, it was kind of an academic idea that DNA could [fold like this], but it wasn't known at all what it meant for biology," said senior study author Marcel Dinger, head of the Kinghorn Centre for Clinical Genomics at the Garvan Institute of Medical Research in Sydney. Watching these i-motifs appear in living human cells "was pretty spectacular," he said.

To spot the i-motifs, Dinger and his team designed an antibody — a protein that targets foreign invaders in the body — to specifically find and latch onto i-motifs. They tagged these antibodies with a fluorescent dye and then injected them into human cells in the lab. Using powerful microscopes, they spotted a bunch of tiny, glowing, green dots — colored antibodies holding onto elusive i-motifs.

According to Dinger, the hardest part about publishing this paper was proving that the antibody latched only onto i-motifs and not onto other shapes of DNA. They did this by testing how the antibody interacted with other forms of DNA, such as the classic double helix and a better-studied structure related to the i-motif, called the G4 quadruplex. Sure enough, the antibody proved faithful — it didn't bind to either of these other forms.

"This is a very exciting discovery," said Zoe Waller, a senior lecturer in chemical biology at the University of East Anglia in the United Kingdom who was not involved with the study. "This work is the icing on what is now quite a large cake of evidence that these [forms of DNA] do exist in vivo and are worthy of further study."

A role in regulation

What really fascinated the team, Dinger told Live Science, was not only that these i-motifs existed in living cells but that these green lights twinkled on and off — meaning the i-motifs folded into existence and then unfurled, repeatedly. In particular, the researchers found that the DNA folded into i-motifs at higher rates during a specific stage of transcription — the process that kicks off the translation of genes into proteins — when the DNA was just beginning to actively transcribe. Later, the DNA unfolded back into its usual form, and the i-motifs disappeared. According to Dinger, this probably means the i-motifs play a very specific role in regulating the transcription process.

Indeed, this study supports previous research in lab dishes that these folds occur in areas that regulate genes. These areas include the very ends of chromosomes called "telomeres" that are thought to play a role in aging and regions called promoters which are tasked with turning genes on and off.

But despite knowing some of the regions in which these folds can appear, the researchers don't yet know which genes the folds control or what happens when you disturb the cell so that it can't form these structures.

"There's so much of the genome that we don't understand, probably like 99 percent of it," Dinger said.  Seeing DNA folded like this in living cells "makes it possible to decode those parts of the genome and understand what they do."

Indeed, these weird folds are probably present in every one of our cells, Dinger said. And because the genome has fewer folds like this compared with regularly shaped DNA, drugs that target DNA may be able to bind more specifically, compared with non-folded regions, he said.

These types of drugs could be helpful for cancer treatment, for example. One problem with certain cancer treatments is that they aren't selective enough in targeting the problematic stretches of DNA, said Laurence Hurley, a professor at the University of Arizona and the chief scientific officer of Reglagene, a company that designs therapeutic molecules to target four-stranded DNA like i-motifs. Instead, cancer drugs may attach to other parts of DNA as well, leading to possibly harmful side effects, said Hurley, who was not part of the new study.

"I've been waiting for a paper like this to come out for a long time," Hurley told Live Science. "This provides a firm foundation for a major therapeutic effort around these new structures, and it takes away the doubt that people have had [about] whether these structures were real and had any biological significance."