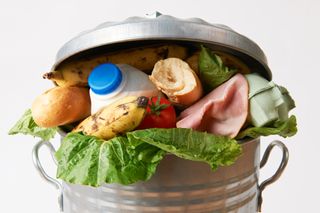 Healthy eaters have a lot to be proud of in their nutrient-packed diets, but a new study finds that a health-conscious diet may have a planet-harming downside: These eaters may be wasting more food than those who stick to less-healthy options.

In the study, published today (April 18) in the journal PLOS One, the researchers found that higher-quality diets were associated with more food waste. In particular, the investigators reported that about 39 percent of the total daily food waste in the U.S. comes from fruits, veggies and mixed dishes made from both. The next biggest culprit was dairy, at 17 percent, followed by meat, at 14 percent.

"Eating healthy is important and brings many benefits, but as we pursue these diets, we must think much more consciously about food waste," study co-author Meredith Niles, an ecologist at the University of Vermont, said in a statement.

For information on American diets, the researchers looked at data from the 2015 Healthy Eating Index (a national survey about eating habits) and the U.S. Department of Agriculture’s "What We Eat in America" database. To calculate how much food was wasted, they looked at various governmental sources. [Americans Eat Nearly a Ton of Food Per Year (Infographic)]

All told, the study found that the average American wasted nearly 1 lb. (0.5 kilograms) of food each day from 2007 to 2014. Countrywide, that comes out to about 300 million lbs. (136 million kg) of wasted food each day, the researchers concluded.

How does this waste impact the environment?

Although fruits and vegetables don't require as much land or fertilizers to grow compared to other food, they require a good amount of pesticides to maintain and they are very thirsty for water. More than half of the 4.2 trillion gallons of irrigation water used in a year went to growing uneaten fruits and vegetables. It's not all bad news, however: Previous research has found that higher-quality diets are associated with environmental benefits, such as fewer greenhouse gas emissions and of course, less cropland use, the study said.

The researchers noted that, despite the findings, they aren't suggesting Americans opt for less-healthy diets, but instead recommend that dietary programs consider food waste as well. Some countries, such as Brazil and Sweden, have adapted healthy eating guidelines that take sustainability into consideration, but not food waste, according to the statement.

Education on how to prepare and store food and how to tell the difference between spoiled food and food that's damaged but still edible could also help reduce waste, the researchers said. Indeed, some programs have already sprung up to address these issues, such as those from British activist and author Tristram Stuart, who gathers unwanted crops and turns them into full meals for people.

On an individual level, being aware of the issue of food waste and planning shopping and meals accordingly can make a difference, the researchers said — food for thought for when you see that next imperfect kiwi.