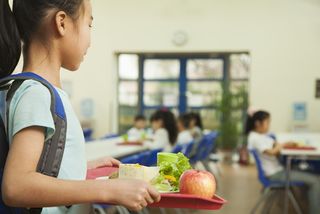 Are kids simply tossing out all the healthy food that's now heaped upon their lunch trays at school — foods meant to be high in nutrients and low in sugar, salt and fat, as required by law?

Critics of the updated National School Lunch Program say yes, and they have lots of anecdotal evidence to back up their claim. Photographs and videos of kids dumping their veggies in the trash and giving the thumbs down have exploded on social media since the Healthy, Hunger-Free Kids Act was passed in 2010.

Yet recent studies have shown that claims of food waste may be inflated. And now, researchers at Harvard University have found that schoolkids will consume more fruits and vegetables if they are given at least 25 minutes to eat.

The researchers followed more than 1,000 elementary school kids from low-income families who were eligible for these free school-based meals. They found that children with less than 20 minutes of seated lunch time consumed 13 percent less of their entrees, 10 percent less of their milk and 12 percent less of their whole grains and vegetables when compared with students who had at least 25 minutes to sit and eat their lunch. Kids who were given less time for lunch also were less likely to choose healthier options.

The study, which will be published in an upcoming issue of the Journal of the Academy of Nutrition and Dietetics, may help to quell fears that the recent laws are backfiring and making kids less healthy. [10 Ways to Promote Kids’ Healthy Eating Habits]

"There is reason to be concerned that if students aren't eating sufficient amounts in schools, they may leave school hungry and then overconsume less nutritious foods," said Juliana Cohen, lead author of the study. "This may place them at increased risk for unhealthy weight gain," said Cohen, an adjunct assistant professor at the Harvard T. H. Chan School of Public Health and an assistant professor at Merrimack College in North Andover, Massachusetts.

But there are no national standards for the length of the school lunch period, Cohen said. Thus, the new findings provide evidence that offering kids enough time to sit down and eat may ensure that they will eat healthier foods.

In 2008, a study conducted by the U.S. Institute of Medicine, a nonprofit, non-governmental organization comprising the nation's top physicians (now renamed the National Academy of Medicine), found that many school lunches were unhealthy and did not meet national dietary guidelines. The study inspired the passage of the Healthy, Hunger-Free Kids Act, which set new nutrition standards, even for schools that don't provide free lunches.

The law limits calories and mandates servings of whole grains, fruits and vegetables. Schools must abide by the standards in order to receive federal funding to support their lunch program.

However, the law has faced some resistance. The School Nutrition Association (SNA), representing 55,000 school nutrition professionals working in cafeterias nationwide, has claimed that the mandate is a burden on school budgets. Healthier meals are more expensive to produce, kids don't like them and enrollments in the lunch program in many schools are down, according to the SNA.

But pundits have argued that criticism of the Healthy, Hunger-Free Kids Act, signed into law by President Barack Obama, may be based more on politics than on science. Bettina Elias Siegel, who created the blog The Lunch Tray, has noted that most studies do not indicate that children hate the food or that food waste is on the rise as a result.

In her blog, Siegel highlighted a survey of nearly 600 schools published last year in the journal Childhood Obesity that revealed that although most schools reported that children first complained about the new meals, the kids soon grew to like them. [4 Tips for Sneaking 'Health' into Your Kids' Food]

As for food waste, Cohen said that two major studies in large, low-income school districts have found similar results: The new standards have led to improvements in diets and decreases in waste.

One large study did find increases in waste, Cohen said, but the children studied were from a higher income bracket and perhaps not representative of the majority of kids getting free lunches. Smaller studies have found more waste in wealthier, suburban schools compared to poor, urban schools.

David Just, an associate professor in the Charles H. Dyson School of Applied Economics and Management at Cornell University in Ithaca, New York, who was not part of the Harvard-led study, said the findings are in line with what he and others in the field have uncovered.

"If you are a kid and you're looking at your tray and you have limited time, what do you leave out?" Just told Live Science. "You leave out the things you like the least, and they tend to be the things that are the best for you."

Just and his colleague Joseph Price, an associate professor at Brigham Young University in Provo, Utah, found that scheduling recess before the seated lunchtime, instead of after, similarly increased the students' consumption of fruits and vegetables.

When recess playtime comes after eating, "[the children] have an incentive to rush through lunch," Just said.

The researchers on the Harvard-led study, which includes members of the Boston-based anti-hunger nonprofit Project Bread, wrote that the new lunch nutrition guidelines are surely bringing healthier foods to schoolkids. More research is needed, however, to maximize the efficiency of the program.