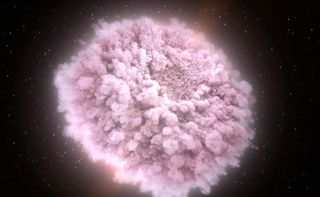 In this illustration, a hot, dense, expanding cloud of debris gets stripped from neutron stars just before they collide.
(Image: © NASA's Goddard Space Flight Center/CI Lab)

Astronomers had suspected the existence of these mushroom clouds for a long time. But even though the clouds may have shapes similar to the doomsday puffs resulting from nuclear explosions, the cosmic type had been far too faint and far away to make out in detail, NASA scientist Zaven Arzoumanian said during a talk Sunday (April 15) here at the April meeting of the American Physical Society. To older instruments, the explosions looked just like two mysterious blips in the light coming from distant neutron stars, which are the strange, tiny, ultradense remains of ancient stellar explosions called supernovas.

"There's a very rapid rise in flux [the brightness of the star as seen from Earth] and then a drop, and then it comes back and slowly fades," Arzoumanian said. "It didn't take much head-scratching before people figured out that what we're probably seeing is a mushroom cloud on a neutron star, rising and cooling to the point that it leaves the sensitivity range [of our existing sensors] and then falling back to the surface and reheating." [The 10 Greatest Explosions Ever]

But beyond those two blips appearing periodically in neutron-star observations, researchers hadn't been able to observe these mushroom clouds, technically called "photospheric radius expansion bursts," in much detail, Arzoumanian said.

That changed thanks to an X-ray telescope called the Neutron Star Interior Composition Explorer (NICER), which was installed on the International Space Station in June 2017. The crucial point of this telescope — which looks something like a giant, swiveling security camera — is to probe the physics of matter at the core of those ultradense stellar remains. And it's also helping NASA develop a "galactic positioning system" based on neutron-star signals. But to accomplish those tasks, the device was made to be so sensitive that it can see those mushroom clouds bloom.

NICER doesn't see the mushroom clouds in the same way people do. It won't be producing any pretty, Hubble telescope-style photographs of the strange formations. But by carefully studying the graphs of changing light from these neutron stars, Arzoumanian said, astronomers can make precise measurements of the clouds' temperatures and sizes as they burst from the neutron stars' hard crusts.

Through this orbiting telescope, Arzoumanian's team has watched the clouds reach heights ranging from about 10 to 100 miles (15 to 150 kilometers) above the surfaces of neutron stars. That's huge. While the precise sizes of neutron stars aren't yet known — answering that question is actually one of the goals of NICER, and it could solve some deep mysteries about particle physics — they aren't believed to grow much larger than 40 miles (64 km) wide.

"So that's a tremendous amount of energy that's released on the surface of the star," Arzoumanian said.

His group has also managed to observe multiple explosions in a row on a single star. At one point, a star threw up mushroom clouds every 13 minutes or so for just under an hour, each one weaker than the last.

Arzoumanian speculated that the progressive weakening of the explosions was a result of the neutron star not having enough time to fully recover, thus causing less energy to burst into the atmosphere each time.

This is an early result from a project that could soon probe much deeper into neutron stars, which Arzoumanian called "the most outrageous objects that most people have never heard of." Live Science will be following NICER closely as more results come in.