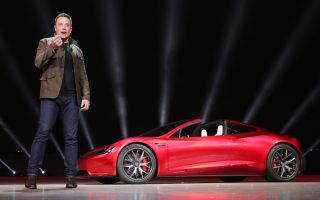 What brought about this somewhat underwhelming accolade? Musk had directed Tesla to adopt advanced automation as the assembly line for Tesla's new sedan, the Model 3 electric car. But now that Tesla is behind in making the cars, its customers on the waiting list are grumbling.

"Yes, excessive automation at Tesla was a mistake," Musk wrote in the April 13 tweet. "To be precise, my mistake. Humans are underrated." [Super-Intelligent Machines: 7 Robotic Futures]

The Model 3 is Tesla's first midpriced, mass-produced electric car, according to CBS News. Its more affordable price tag, starting at $35,000, prompted many people to preorder it, and the company responded by saying it would produce 5,000 new cars each week.

However, the actual output has been much lower. At the end of March, Tesla hit a production pace of 2,000 cars per week, according to USA Today. Part of the reason for the production delay is the technology at the plant, in Fremont, California, Musk said. In fact, the Model 3 assembly line is seen as one of the most robot-heavy car plants on the planet, CBS News reported.

"We put too much new technology into the Model 3 all at once," Musk told Gayle King, a co-host at "CBS This Morning."

Musk added that instead of speeding up Model 3 production, the robots actually slowed it down. "We had this crazy, complex network of conveyor belts… and it was not working, so we got rid of that whole thing," he said.

Now, Musk has directed the company to suspend Model 3 production for the second time in recent weeks. The temporary halt will help Tesla "to improve automation and systematically address bottlenecks in order to increase production rates," the company told USA Today.

Musk said he was sleeping at the Model 3 factory so he could get more work done. The couch there is so narrow, he ended up sleeping on the floor one night, he told CBS.

We have to agree with Musk here: Humans may be underrated, but sleeping on the floor certainly isn't.