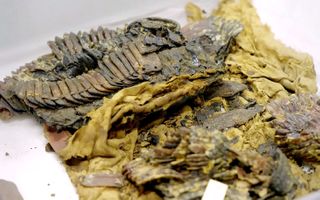 Was King Tut a boy soldier? Perhaps, according to leather armor found in his tomb. But many news reports describing this warrior-pharaoh hypothesis aren't telling you the whole story.

Indeed, media reports are playing up this idea that King Tutankhamun wasn't a sickly pharaoh, as past research has suggested, but rather a fighter who wore his armor into battle. However, the archaeologist who discovered that King Tut's armor might have been worn told Live Science that this warrior hypothesis is just one possibility.

Additionally, even if the armor was actually worn, archaeologists can't be certain it was this Egyptian ruler who donned the protection, another researcher said. [In Photos: The Life and Death of King Tut]

Howard Carter, the Egyptologist who discovered King Tut's tomb in the Valley of the Kings in 1922, also discovered this armor in a box within the tomb. Recently a scientist re-examined this armor using modern technology.

"We cannot be sure that Tut wore the armor in battle, but I am quite sure that the armour was worn," Lucy-Anne Skinner, a doctoral student at the University of Northampton and The British Museum, told Live Science. She detected abrasions along the edges of the armor's leather scales — a finding that indicates the armor was worn.

"It is a nice discovery, showing that [this] type of armor might have been actually used, whether by Tutankhamun himself or not," said André Veldmeijer, a visiting research scholar at American University in Cairo who is advising Skinner in her research.

Skinner examined the leather by taking images of it while varying the angle of light hitting it — a technique called reflectance transformation imaging (RTI).

"These variations in illumination over [the object] mean that features such as abrasions or paint strokes can be brought into sharp relief once all the images are layered into one RTI image," Skinner said.

The armor had been damaged soon after it was discovered, when a member of Carter's team tried (unsuccessfully) to conserve it. However, Skinner is convinced that the abrasion she detected occurred in ancient times and wasn't the result of that botched handling of it.

"If the abrasion had occurred after excavation, I would expect it to be found all over the scales, not just the edge," Skinner said.

Additionally, a photograph taken by Harry Burton (another member of Carter's team) before the leather armor was removed from the box shows that the leather straps that tied the armor together were "stretched" and that there was "a torn seam in the leather at the top left corner," Skinner said, noting that both these features indicate that the armor suffered "wear and tear from use."

Images painted on the walls of Tutankhamun's tomb portray him wearing armor while riding a chariot into battle, as well as scenes of him hunting animals. But images can be deceiving. And researchers have become increasingly skeptical that Tutankhamun ever went into battle.

A study of his remains published in 2010 in The Journal of the American Medical Association found that the boy king had several maladies, including malaria and Kohler disease (a rare bone disorder of the foot) that likely made it difficult for him to walk. The "walking impairment and malarial disease sustained by Tutankhamun is supported by the discovery of canes and an afterlife pharmacy in his tomb," researchers wrote in the 2010 journal article.

Skinner's discovery was featured recently in the documentary "Secrets of Tutankhamun's Treasures," which aired on March 28 on Channel 5, a TV station in the United Kingdom.