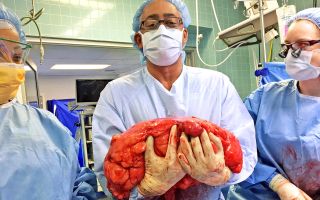 The man, Kevin Daly, realized something was wrong when he lost more than 30 lbs. in 2015, but his belly fat didn't budge, the New York Daily News reported earlier this month.

A CT scan revealed that the man's belly bulge was in fact a rare type of tumor called a liposarcoma, according to Fox News.

Liposarcomas are tumors that grow in fat tissue, according to the Genetic and Rare Disease Information Center (GARD). Because these tumors can spread to surrounding tissues or organs in the body, they are considered malignant.

Liposarcomas most often develop in fat tissue found in the thigh, behind the knee or in the abdomen, GARD says. (Indeed, Daly's tumor arose from fat tissue in his abdomen.)

The tumors are rare; according to the American Cancer Society (ACS), about 13,000 sarcomas will be diagnosed in 2018. Liposarcomas are just one type of sarcoma, which refers to a cancer that forms in certain tissues in the body, including bone, muscle and fat.

The first approach to treating a liposarcoma is often surgery, according to GARD, though surgery can be difficult when the tumor is in the abdomen and growing near vital organs.

In Daly's case, the tumor was wrapped around one of his kidneys, and took 4 hours to completely remove, the Daily News reported.

Daly's surgeon, Dr. Julio Teixeira of Lenox Hill Hospital in New York, told the Daily News it was the largest tumor he had ever removed.