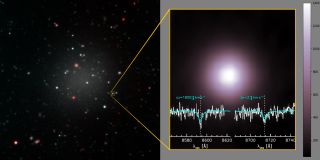 Here's a problem: The universe acts like it's a lot more massive than it looks.

Take galaxies, those giant, spinning masses of stars. The laws of motion and gravity tell us how fast these objects should turn given their bulk. But observations through telescopes show them spinning way faster than we'd expect, as if they were actually much more massive than the stars we can see indicate.

Astrophysicists have come up with two main solutions to this problem. Either there's a lot of mass out there in the universe that we can't detect directly, mass scientists call dark matter, or there's no dark matter out there, but there is something missing from our laws of gravity and motion. Researchers call the second proposed solution modified Newtonian dynamics (MOND), which suggests that if the laws are properly tweaked, the universe would make sense without dark matter.

A new paper, published today (March 28) in the journal Nature, provides compelling evidence that there really is dark matter out there and that modifying the laws of physics wouldn't by itself solve the universe's weight problem. [The 18 Biggest Unsolved Mysteries in Physics]

In that study, the researchers found an object that could exist in a universe that has dark matter, but that would be nearly unimaginable in a MOND universe: a totally normal galaxy, one that seems to operate without any dark matter-type forces.

Researchers first spotted galaxy NGC 1052–DF2 through the Dragonfly Telephoto Array. Then, after long observations through telescopes like Hubble and Hawaii's Gemini and W.M. Keck observatories, the researchers found that the galaxy behaves exactly the way our laws of physics predict it should — without the need for dark matter corrections. It moves just as fast as the regular old laws of astrophysics would suggest, when calculated based on the mass of the stars researchers can see. And that normalcy is deeply weird.

So NGC 1052–DF2 is a head-scratcher whether you lean toward dark matter or toward MOND. But physicists contacted by Live Science to discuss this paper mostly said the finding made dark matter (already the dominant explanation for the universe's weirdness) look a lot more likely.

The thing about dark matter, or whatever's causing outer space to move so weirdly, is that it's predictably distributed throughout the universe. Physicists expect the dark matter "halo" around lightweight, dim galaxies like NGC 1052–DF2 to be extra big, and they expect to find less evidence of dark matter effects in more-massive galaxies. Similarly, MOND theorists expect to find the most significant observable effects of their modified laws in less massive galaxies like NGC 1052–DF2, and lesser effects in more-massive galaxies.

Kathryn Zurek, an astrophysicist at the Lawrence Berkeley National Laboratory who did not work on the paper, wrote in an email to Live Science that the discovery "looks on the surface to be another nail in the coffin of MOND," because "the absence of DM [dark matter] in this galaxy shows that baryons [normal matter] and DM indeed behave as separate substances."

In other words, finding a galaxy without dark matter is pretty good evidence that dark matter is a real thing. If there were no such thing as dark matter and the current laws of physics were just slightly wrong, you'd expect the laws to be just as wrong in NGC 1052–DF2 as they are everywhere else. [8 Galaxies with Wacky Names]

But that doesn't mean the results in this paper provide perfect support for dark matter theories either.

"There are simulations of the universe starting back near the Big Bang that show dark matter was produced and actually gravitationally attracted normal matter to it, and that's how the galaxies were formed," said Dan Bauer, a physicist at Fermi National Accelerator Laboratory, who studies dark matter and did not work on the paper.

At the beginning of everything, those simulations suggest, all the matter we see in the galaxy was spread out in a thin gas. But the dark matter floated in clumps. And over time, those clumps attracted the gas with their gravity. The gas crunched together in balls, lit up as stars, and formed planets and galaxies. [Is Dark Matter Less 'Lumpy' Than Predicted?]

"Basically, it was the seed for drawing in normal matter," Bauer told Live Science. "So then, if you find a galaxy that appears not to have dark matter, you have to ask, 'How was it formed?'"

While NGC 1052–DF2 doesn't break any fundamental rules of the dark matter theory, Bauer said the galaxy is surprising and unexpected enough to force astrophysicists to develop some new models of how galaxies come together.

Stacy McGaugh, an astrophysicist at Case Western Reserve University in Ohio who has worked on both dark matter and MOND and did not work on the paper, disagreed with the idea that this galaxy refutes MOND or bolsters the case for dark matter.

"I find this [discovery] unlikely in all possible contexts," McGaugh wrote in an email. "That doesn't make it wrong, just really weird."

If NGC 1052–DF2 behaves as the new research describes, he wrote, that presents challenges to both explanations for the missing mass in the universe. Sure, MOND doesn't easily explain a galaxy behaving as if there is no missing mass. But dark matter theorists have relied heavily on the idea of "abundance matching," which links the masses of dark matter halos closely to the masses of the galaxies they surround.

But McGaugh was something of an outlier in this perspective.

"I don't find that [point of view] at all compelling," Bauer said. "To me, there are many ways that you could form a galaxy like this — for example, in a collision of other galaxies."

McGaugh also argued that the paper relies on too little data for scientists to be totally sure of its conclusion. The researchers figured out NGC 1052–DF2's spin speed by looking at the movement of 10 objects in the region of the galaxy. And 10 objects isn't always enough to accurately measure a galaxy's movement, he said.

"I have no reason to doubt the data, though I note that there are only 10 objects that contribute to the [speed] measurement," he wrote. And 10 objects isn't always enough to accurately measure a galaxy's movement."When more data are obtained, sometimes this [amount] proves to have been enough, but sometimes it proves to have been inadequate. So, this is at the hairy edge of credible."

He also raised the possibility that another galaxy nearby was tweaking NGC 1052–DF2's motion through an element of MOND called the "external field effect." However, he said he needed more precise data to say more.

Live Science reached out to several other experts in galactic rotation for their opinions on the strength of the paper's measurements and claims, but none responded by press time.

Bauer, whose research focuses on dark matter but not galactic rotation, said that the most interesting next step for him will involve simulations. He said he wants to see whether researchers who model how galaxies form can come up with models that account for NGC 1052–DF2.

Right now, one paper on one galaxy is far from firm proof of dark matter's existence. But it's one more tantalizing clue regarding the universe's invisible mystery.