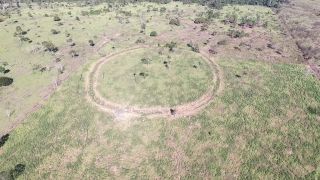 Aerial photo of site Mt05, a circular enclosure (140 m diameter) located on a hilltop, was uncovered during surveys of the Amazon. This and other earthworks reveal that the Amazon was once densely populated before the arrival of Columbus.
(Image: © José Iriarte)

Mysterious geoglyphs and a host of other earthworks in the Amazon rainforest suggest that the now-sparsely populated region was home to up to 1 million people before the arrival of Columbus, a new study finds.

The Amazon, the world's biggest river basin, contains the largest rainforest on Earth, covering about 2.6 million square miles (6.7 million square kilometers) across nine countries. This area, known as Amazonia, has an extraordinary array of life, harboring 1 in 10 known species in the world and 1 in 5 of Earth's birds.

Amazonia is often thought of as pristine nature, but over the past few decades, archaeologists have discovered evidence of numerous large, complex societies that may have inhabited Amazonia before the arrival of Columbus. Although these newfound discoveries contrast with the small Amazonian societies anthropologists studied in the 20th century, they are in line with initial eyewitness accounts of Europeans from the 16th and 17th centuries. [Aerial Photos of Mysterious Amazon Earthworks]

For example, previous research excavated large earthworks along the southern rim of the Amazon rainforest. These included mysterious geometrical structures known as geoglyphs that combined square, circular and hexagonal earthworks.

"The geoglyphs are interesting for several reasons," said study lead author Jonas Gregorio de Souza, an archaeologist at the University of Exeter in England."Despite the impressive architecture of these features, and the effort and planning that must have been involved in their construction, archaeologists have actually found very few remains of habitation inside the enclosures. That means they were probably not settlements, and the most likely explanation is that they were used for ceremonial gatherings, although their exact function is still a mystery."

The earthworks that scientists have found so far in the southern rim of Amazonia are typically far apart from each other. However, this region was occupied by peoples that shared common lifestyles, suggesting the earthworks might have actually formed a chain about 1,100 miles (1,800 kilometers) long.

To see how widespread human settlements were in the Amazon, scientists focused on the basin of the upper reaches of the Tapajós River, a major tributary of the Amazon. They concentrated on this area because of the dearth of archaeological research in this previously uncharted region.

The researchers used satellite images to discover 81 new archaeological sites in the upper Tapajós basin with a total of 104 earthworks. This suggests there is no gap in the network of earthworks spanning across Amazonia's southern rim, they said.

"We filled the last piece of a puzzle in Amazonian archaeology," de Souza told Live Science. "Thanks to our research in the Upper Tapajós river, now we can speak of a whole 1,800-kilometer [1,100-mile] stretch of rainforest occupied by these earth-builders."

The scientists then conducted ground surveys of 24 of these sites. "When you go to the field, not everything is like you planned," de Souza said. "In this region, the greatest difficulty is access. The distances involved are huge, and you may not always get permission from the land owners to get in, if you are lucky enough to be able to speak to them. Some very interesting earthworks we saw on the satellite imagery could not be visited because we were not granted access, though in general, people were very nice to us."

The researchers unearthed evidence, such as ceramics, polished stone axes, garbage dumps and soil rich in charcoal, that the sites they visited were once inhabited.

These sites dated to A.D. 1250 to 1500, and ranged from about 100 to 1,300 feet (30 to 400 meter) wide, mostly found on relatively flat landscapes with gentle hills. The smallest had circular ditches, often with interruptions suggestive of an entrance. The largest were typically hexagonal fortified settlements, suggesting a certain degree of planning and uniformity in their construction, with multiple mounds around circular plazas, as well as sunken roads radiating in many directions and stretching for up to 0.87 miles (1.4 km).

Based on the size and distribution of the earthworks, the researchers suggested that similar settlements may have extended over about 154,000 square miles (400,000 square kilometers) of the southern rim of the Amazon, supporting a population of between 500,000 and 1 million people in late pre-Columbian times.

The scientists plan more excavations in the upper Tapajós basin to refine their understanding of the cultural developments there "and how they compare to similar sites in the surroundings," de Souza said. "For example, what were the functions of different types of sites? Was the whole region occupied by a single culture? Were there different peoples established in the area in different time periods? In the case of the most elaborate earthworks, were they built all at once or were they gradually enlarged over the centuries?"

However, the new study doesn't mean Amazonia was ever a teeming megalopolis, de Souza said.

"People may misinterpret our results as indicating that the entirety of Amazonia was very densely settled in the past, and that environmental impact by pre-Columbian peoples was enormous, with not a single patch of pristine forest left standing," de Souza said. "This may have been the case in some regions where archaeologists have now uncovered evidence of extensive pre-Columbian occupation, but the truth is that most of the Amazon is uncharted. Only when more research like ours is done in parts of the basin which are still unexplored we will have an adequate understanding of how pre-Columbian populations were distributed across Amazonia."

The scientists detailed their findings online March 27 in the journal Nature Communications. The project was funded in part by National Geographic and by the European Research Council project Pre-Columbian Amazon-Scale Transformations, and was coordinated by José Iriarte at the University of Exeter.