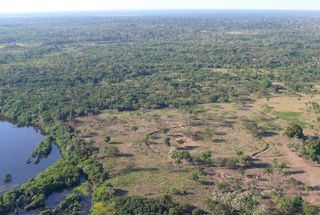 Shown here, a ring ditch next to Laguna Granja in the Amazon of northeastern Bolivia.
(Image: © Heiko Prumers)

A series of square, straight and ringlike ditches scattered throughout the Bolivian and Brazilian Amazon were there before the rainforest existed, a new study finds.

These human-made structures remain a mystery: They may have been used for defense, drainage, or perhaps ceremonial or religious reasons. But the new research addresses another burning question: whether and how much prehistoric people altered the landscape in the Amazon before the arrival of Europeans.

"People have been affecting the global climate system through land use for not just the past 200 to 300 years, but for thousands of years," said study author John Francis Carson, a postdoctoral researcher at the University of Reading in the United Kingdom. [See Images of the Ancient Amazonian Earthworks]

For many years, archaeologists thought that the indigenous people who lived in the Amazon before Christopher Columbus arrived in the Americas in 1492 moved across the area while making barely a dent in the landscape. Since the 1980s, however, deforestation has revealed massive earthworks in the form of ditches up to 16 feet (5 meters) deep, and often just as wide.

These discoveries have caused a controversy between those who believe Amazonians were still mostly gentle on the landscape, altering very little of the rainforest, and those who believe these pre-Columbian people conducted major slash-and-burn operations, which were later swallowed by the forest after the European invasion caused the population to collapse.

Carson and his colleagues wanted to explore the question of whether early Amazonians had a major impact on the forest. They focused on the Amazon of northeastern Bolivia, where they had sediment cores from two lakes nearby major earthworks sites. These sediment cores hold ancient pollen grains and charcoal from long-ago fires, and can hint at the climate and ecosystem that existed when the sediment was laid down as far back as 6,000 years ago.

An examination of the two cores — one from the large lake, Laguna Oricore, and one from the smaller lake, Laguna Granja — revealed a surprise: The very oldest sediments didn't come from a rainforest ecosystem at all. In fact, the Bolivian Amazon before about 2,000 to 3,000 years ago looked more like the savannas of Africa than today's jungle environment.

The question had been whether the early Amazon was highly deforested or barely touched, Carson said.

"The surprising thing we found was that it was neither," he told Live Science. "It was this third scenario where, when people first arrived on the landscape, the climate was drier."

The pollen in this time period came mostly from grasses and a few drought-resistant species of trees. After about 2,000 years ago, more and more tree pollen appears in the samples, including fewer drought-resistant species and more evergreens, the researchers report today (July 7) in the journal Proceedings of the National Academy of Sciences. Charcoal levels also went down, indicating a less-fire-prone landscape. These changes were largely driven by an increase in precipitation, Carson said.

The earthworks predate this shift, which reveals that the diggers of these ditches created them before the forest moved in around them. They continued to live in the area as it became forested, probably keeping clear regions around their structures, Carson said.

"It kind of makes sense," he said. "It's easier to stomp on a sapling than it is to cut down a big Amazonian tree with a stone ax." [Gallery: Biodiversity of the Amazon (Photos)]

The discovery that the human activity came before the forest answers some questions, like how Amazonian people could have built in the rainforest with no more than stone tools (they didn't have to), how many people would have been necessary to construct the structures (fewer than if clear-cutting had been required), and how the population survived (by growing maize).

The study also has wider implications for the modern day, Carson said. The question of how to preserve the Amazonian rainforest is difficult to answer; some people say humans need to get out, and others believe people and the forest can coexist. Ancient history could provide a guide, as well as a greater understanding of how the forest has recovered from earlier perturbations. (The Amazon also drives climate as well as responds to it, thanks to its ability to take up carbon from the atmosphere.)

The new study suggests that the modern forest is a coproduction between humans and nature, Carson said. Natural cycles drove the rainforest to sprout, but humans stayed on-site for 1,500 years afterward, he said.

"It's very likely, in fact, that people had some kind of effect on the composition of the forest," Carson said. "People might favor edible species, growing in orchards and things like that, [or] altered the soils, changing the soil chemistry and composition, which can have a longer-lasting legacy effect."

Those long-range changes are next for Carson and his colleagues to investigate. "This kind of study has only just started in Amazonia," Carson said.