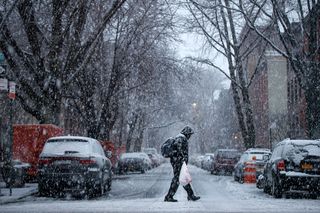 This year, large portions of the East Coast of the U.S. faced two nor'easters in less than a week.
(Image: © Drew Angerer/Getty)

As average temperatures rise across the planet, the frozen Arctic is heating up faster than anywhere else.

With that warmth comes a surprising twist: Unusually warm Arctic winter temperatures are linked to bitter cold and snow in other parts of the Northern Hemisphere, such as the northeastern U.S., parts of northern Europe and northern Asia, according to an analysis of 66 years' worth of climate data.

And the relationship between Arctic warmth and severe winter weather was strongest in in the northeastern U.S. — in fact, a temperature spike in the Arctic meant that the U.S. Northeast was two to four times more likely than usual to experience a bout of extreme winter weather, the scientists reported in a new study. [The 10 Worst Blizzards in US History]

Past climate projections predicted that, in a warming world, winters would be the seasons to heat up the fastest — and yet recent winters in the Northern Hemisphere were more severe than scientists anticipated, said Judah Cohen, the study's lead author and director of seasonal forecasting at Atmospheric and Environmental Research, an organization that assesses risks from weather events and climate change.

To understand what might be driving these unusual episodes, Cohen and his colleagues looked at pulses of warmth in the Arctic during winter months, to see how they lined up against weather anomalies elsewhere in the globe.

"When the Arctic pulse is warm, you tend to get an increase in occurrences of extreme winter weather across the midlatitudes, including the eastern U.S., northern Europe and northern Asia," Cohen told Live Science.

The relationship between spiking Arctic warmth and pockets of cold to the south was "really, really strong" — and it was strongest in the eastern U.S., Cohen said.

Since 1990, the eastern U.S. has been visited by winter storms so severe that they earned highly dramatic nicknames, such as "Snowzilla," "Snowmaggeddon" and "Snowpocalypse." The increase in incidences of extreme storms with heavy snowfall corresponded with periods of excessive Arctic warmth, the study authors wrote.

How does this relationship work? As the scientists' observations reflected only the comparison of weather patterns over time — and not what was driving them— the researchers could not conclude that a warmer Arctic was directly responsible for harsh winter storms in the U.S., they reported in the study.

But answers may lie in another atmospheric disturbance linked to a warming Arctic, Cohen said.

According to the study, data from past decades showed that fall snow cover in Siberia increased as the Arctic warmed, which cooled northeastern Eurasia. Meanwhile, melting sea ice fueled warmer temperatures in northwestern Eurasia.

These air-temperature changes close to the surface led to similar changes higher up in the atmosphere. This, in turn, affected the jet stream — a conveyer belt of wind that carries warm air and moisture around the globe — by increasing its "waviness," making jetstream waves dive farther south and stretch farther to the north. In turn, this extra amplification can alter the movement of cold air masses near the pole, otherwise known as the polar vortex, Cohen explained.

And this disturbance of the polar vortex could end up shaping conditions that worsen winter weather in the U.S.

"The cold air that's normally confined to the Arctic, it's kind of dammed in by the polar vortex itself — because winds normally blow from west to east inside the polar vortex, so it acts as barrier, keeps the cold air to the north and the mild air to the south," Cohen said. "When it breaks down, the cold air that's penned up in the Arctic spills to lower latitudes, and that's when you get those episodes of severe winter weather."

Arctic scientists like to say that "what happens in the Arctic doesn't stay in the Arctic," but the interconnectivity between Earth's dynamic atmospheric systems is no laughing matter, Cohen said. The complexity of these systems is reflected in emerging disruptions that are likely the products of climate change, though there is still much to be learned about how climate change could shape weather patterns around the world, the study authors reported.

"I'd argue that our expectations for climate change were overly simplistic," Cohen said. "It was kind of expected that if you warm the Arctic, the only thing that's going to lead to is just milder temperatures everywhere — and that's not a complete picture."

The findings were published online today (March 13) in the journal Nature Communications.