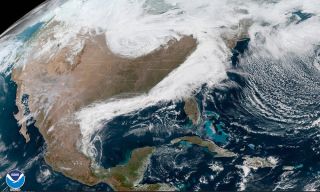 When it comes to storm prediction, "the devil's in the details."
(Image: © NOAA)

A powerful storm is on track to strike the U.S. East Coast tomorrow, the second nor'easter to visit the area in two weeks. The storm will arrive tonight (March 6) at 10 p.m. EST and will last until 4 a.m. on Thursday (March 8), according to a winter storm warning issued today (March 6) by the National Weather Service (NWS).

But will this storm soak the region with rain or bury it in snow?

"Substantial snow accumulations" could blanket New York City and parts of Long Island, New Jersey, Connecticut and the Hudson Valley, the NWS reported. However, exact amounts of snowfall are a little harder to pin down, and estimates for some areas range from nearly 18 inches (46 centimeters) to as little as 5 inches (13 cm), according to the NWS.

For this storm's forecast, agreement among weather models is actually above average, but "the devil is in the details," Stephen DiRienzo, a meteorologist with the NWS, told Live Science in an email.

"The greatest uncertainty in the forecast is along the rain/snow transition line, which for this storm extends from Philadelphia to New York to Boston," DiRienzo explained.

In this case, the storm shifting to the southeast would mean that major northeastern cities would experience substantial snowfall, while a shift to the northwest would douse those cities with heavy rainfall, DiRienzo said.

That explains the variability in NWS maps showing potential snowfall: The high-end map estimates 10 inches (25 cm) of snowfall for New York City, while the low-end map predicts 0 inches (0 cm). The prediction is similar for Boston, with a snowfall range from a high of 7 inches down to 0 inches (18 to 0 cm).

"At this point, we're just slightly unsure of the exact axis of the heaviest snowfall," Michael Musher, a meteorologist with the Weather Prediction Center at the National Oceanographic and Atmospheric Administration (NOAA), told Live Science.

"There's always variability in each system — it just depends on its development and orientation," Musher said.

Various computer models have forecast similar movements for the storm — what remains to be seen is how well they can forecast temperature from the ground up into the upper atmosphere, which could affect the position of the rain/snow transition line, DiRienzo said.

To track these temperatures, weather balloons are deployed by the NWS twice daily — at 7 a.m. and 7 p.m. local time — from about half of the agency's offices, ascending to heights of over 100,000 feet (30 kilometers). The data gathered closer to the storm's arrival, such as data from the weather balloons slated to go up tonight and early tomorrow morning, will help provide more-accurate estimates of where the storm's heaviest snow will fall, DiRienzo said in the email.

"The computer models will give a forecast of expected temperatures in the atmosphere during tomorrow's storm, but those 7 a.m. balloon launches will be critical to determining where the rain-snow line sets up, and therefore, what weather millions of people can expect," he said.