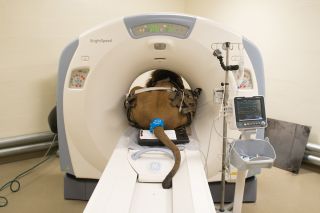 A big cat just got a CAT scan.

Veterinary staff scanned the cat, a 14-year-old African lion named Tomo, to look at the extent of a fungal infection in the big guy's gums, according to a statement from the Columbus Zoo and Aquarium in Ohio.

"Tomo had an infection in his jaw," Dr. Randy Junge, a veterinarian and the vice president of animal health at the Columbus Zoo and Aquarium, said in video posted to the zoo's YouTube page on March 6. "He had a tooth removed, and the area didn't heal, so we were concerned that there might be something more involved in that area than just the bad tooth."

CAT scans, or computerized axial tomography scans, combine a series of X-ray images taken from different angles to create "slices" of the body, according to the Mayo Clinic. The scans, which are also referred to as CT scans, provide doctors with more information than a traditional X-ray does. ("This lion's name is Tomo, and he got a tomo-graphy," Junge said.) [In Photos: A Lion's Life]

Indeed, without the scan, doctors would not have been able to look at the extent of Tomo's infection, according to the statement.

But performing a CAT scan on a big cat presents challenges.

Junge noted that the CAT-scan table is made for humans, not other animals, and can hold only up to 500 lbs. (about 230 kilograms) — "many of my zoo patients are going to go over that," he said in the video.

Weighing in at 450 lbs. (204 kg), Tomo was "pushing the limit. The machine groaned and grumbled a bit, but we were able to get the image done," Junge said.

Another challenge was positioning Tomo correctly. "For a human, they would say, lay this way, put your arms and legs here, hold still, hold your breath," Junge said. "You obviously can't do [those things] with a large animal, especially [one] under anesthesia."

There was a lot of "shifting and pushing and arranging and getting [Tomo] just right, but in the end, our images came out perfectly," and the veterinary staff was able to diagnose Tomo's problem, Junge said.

The vets confirmed that Tomo's fungal infection hadn't spread beyond the affected gum and said the problem will likely get better after the lion finishes a two-month course of antifungal medications.