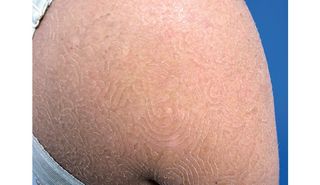 This image shows a young woman's rash, caused by the fungus Trichophyton concentricum.
(Image: © The New England Journal of Medicine © 2016 )

Fungal infections can show up in some pretty unusual ways, and a neat, "maze-like" pattern of concentric rings on the skin is one of them.

Such was the case for a young woman in Fiji, whose rash, typified by a distinctive, swirling pattern, was caused by the fungus Trichophyton concentricum, according to a recent report of her case.

The 18-year-old woman told doctors that she had had the itchy rash for three years, according to the brief report, which was published Dec. 7 in The New England Journal of Medicine. When she saw the doctors, the rash covered about 70 percent of her body.

The fungus, which causes an infection called tinea imbricata, is rare in the United States, said Dr. Carrick Burns, a dermatologist at the United States Naval Hospital Yokosuka in Japan and the lead author of the report. Burns treated the woman in Fiji. [Here's a Giant List of the Strangest Medical Cases We've Covered]

The fungus is usually found in regions such as the South Pacific and Central America, however, Burns said. He noted that he had never seen a case of tinea imbricata before working in the South Pacific in 2015.

The infection is rare, but has some common cousins, including athlete's foot and ringworm. Indeed, the medical term for a ringworm infection is "tinea," according to the National Library of Medicine, and athlete's foot, or "tinea pedis," is also known as "ringworm of the foot." Both fungal infections can be caused by fungi of the same genus as the one that causes the tinea imbricata infection,Trichophyton.

Though these infections' appearances differ, a T. concentricum infection has similarities to those that are caused by other Trichophyton species, Burns told Live Science.

As with athlete's foot or ringworm, for example, the infection is noninvasive, Burns said. In other words, the infection doesn't spread beyond a person's skin. The biggest risk to a person is that the fungus causes the outermost layer of the skin to break down, providing a route for bacteria to enter. This can lead to bacterial infections, Burns said.

The woman in Fiji told the doctors that she had taken anti-fungal medications in the past, and they temporarily cleared up the rash, according to the report. Burns noted that it can be difficult to completely get rid of the infection when patients live in remote areas, because the medications are expensive and hard to get access to. And in some cases, the rash comes back simply because the person becomes re-infected, he said.

When the doctors saw the woman, they gave her more anti-fungal medications to get rid of her "active infection," they wrote in the report. They also advised her to soak her skin in a diluted vinegar to prevent the infection from coming back, they wrote. [7 Home Remedies That Actually Work (and the Science Behind Them)]

Vinegar, or acetic acid, "is an excellent antimicrobial that can treat and prevent superficial bacterial and fungal infections," Burns said. It's particularly useful in areas of the world where other options, such as medicated creams, are not available, he said. Vinegar tends to be available in "even the most remote locations," he added.

In addition to helping prevent infections, vinegar also has a "keratolytic effect," meaning that it helps remove excess skin, Burns said. Rashes such as tinea imbricata can lead to a buildup of flaky, scaling skin, and vinegar can help remove it.