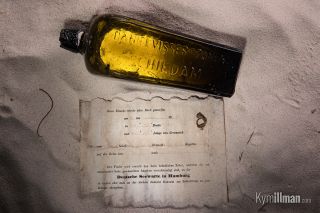 The 131-year-old bottle and message - currently the oldest of their kind on record.
(Image: © Kym Illman/Kymillman.com)

Several news sources in Australia have cast doubt on the authenticity of the 131-year-old message in a bottle. WAtoday reported that Kym Illman, the husband of Tonya Illman, who found the bottle, is a known ambush marketer, and that the bottle might be an elaborate scheme to draw attention to Wedge Island, where the bottle was discovered. In addition, Perth Now noted that Kym Illman "accepts most people would expect such old objects to be in worse condition."

When Live Science reached out to Kym Illman, he defended the finding.

"When you look at the evidence the museum and two German national agencies were able to piece together, its clear the find is genuine," he told Live Science in an email. "Certainly, Guinness World Records thought so; on Thursday night they announced my wife's find was officially 'Guinness World Records Oldest Message in a Bottle.'"

The oldest message in a bottle on record wasn't discovered by a historian, but by a woman picking up trash strewn across the coastal dunes of Western Australia.

Perth resident Tonya Illman scooped up the brownish bottle just north of Wedge Island on Jan. 21. At that point, the bottle had been out of human hands for 131 years and 223 days: According to Illman's husband's website, which describes the finding, it was thrown overboard from a German vessel on June 12, 1886.

"This has been the most remarkable event in my life," Illman said in a statement on the site. "To think that this bottle has not been touched for nearly 132 years and is in perfect condition, despite the elements, beggars belief. I’m still shaking." [Mayday! 17 Mysterious Shipwrecks You Can See on Google Earth]

Illman noted that, despite her resolve to pick up (and throw out) beach trash, "I came across this bottle, and thought, 'Oh, well, at least I don't even have to throw that away because that's quite lovely — I can put that in my bookshelf," she said in a video about the discovery, which plays (of course) "Message in a Bottle" by the English rock band, The Police.

It wasn't until later that day, however, that Illman's son's girlfriend, Bree Del Borrello, discovered the furled, string-tied note inside the bottle. The note was damp, so the group took it home and dried it out for a few minutes in a warm oven.

But unrolling the note only deepened the mystery: the 8-inch by 6-inch (20 by 15.3 centimeters) slip of paper sported dark-colored type in German and barely discernable handwritten letters and numbers, Illman said.

After a lot of sleuthing, along with help from the Western Australia Maritime Museum, the German Federal Maritime and Hydrographic Agency and the German Weather and Climate agency, Illman's family learned about the note's storied history.

Back in 1886, a person aboard a German sailing ship called the Paula threw the bottle overboard with the message inside. It's possible this person was the ship's captain, O. Diekmann, since the type of ink and the handwriting found on the note matched a log that Diekmann made in the ship's meteorological logbook, noting that a note and a bottle had been thrown overboard on June 12 of that year.

The note stated that the Paula was sailing from Cardiff, Wales, to the Dutch East Indies, which is present-day Indonesia. Moreover, the latitude coordinate on the note matched the note in the Paula's logbook, according to the website. The bottle was likely thrown overboard as part of a project investigating global ocean currents, according to the German Maritime and Hydrographic Agency.

German mariners threw thousands of messages in bottles overboard over a 69-year period, but only 662 messages (but no bottles) have been recovered, according to the BBC.

Previously, the oldest message in a bottle was a 108-year-old postcard discovered in a bottle that washed ashore in Germany in April 2015, Live Science reported. The new discovery smashes the record by 23 years.

Editor's Note: This article was first published the morning of March 7 and was updated on March 10 with comments from the bottle's discoverers about reports suggesting the "message in a bottle" could be a fake.