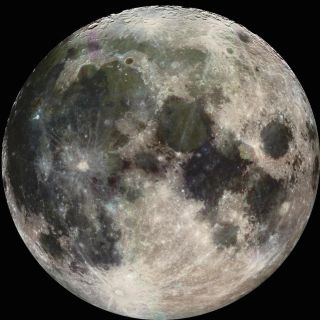 The moon, shown here in a 1992 image captured by NASA's Galileo spacecraft, is set to get its own mobile phone network.
(Image: © NASA/JPL/USGS)

A device weighing less than a bag of sugar is part of an out-of-this-world mission that will allow scientists to deliver 4G mobile coverage to the moon in 2019, according to news sources.

If successful, this less than 2.2-lb. (1 kilogram) device, known as the Ultra Compact Network, will provide the moon with its first ever mobile phone network.

The lunar network will support high-definition streaming of video and data between the moon and Earth, and is part of the Mission to the Moon, a project with the goal of landing the first privately paid for mission to the moon, according to Reuters. [Top 10 Amazing Moon Facts]

"In order for humanity to leave the cradle of Earth, we need to develop infrastructures beyond our home planet," Robert Böhme, the CEO and founder of PTScientists, a Berlin-based company that is part of the Mission to the moon project, said in a statement.

PTScientists is working with Vodaphone Germany and Audi to coordinate the Mission to the Moon. Vodaphone announced today (Feb. 27) that Nokia will help it create the space-grade Ultra Compact Network. This network will allow two Audi lunar quattro rovers communicate with Earth as they explore NASA’s Apollo 17 lunar roving vehicle, which was used by the last astronauts to walk on the moon in December 1972.

The 4G mission is set to launch from Cape Canaveral on a SpaceX Falcon 9 rocket in 2019, according to the statement.

"With Mission to the Moon, we will establish and test the first elements of a dedicated communications network on the moon," Böhme said. "The great thing about this LTE [long-term evolution, a standard for 4G mobile networks] solution is that it saves so much power, and the less energy we use sending data, the more we have to do science."

Mission to the Moon scientists opted to build a 4G, rather than a 5G network because next generation networks are still in testing and trial phases and may not yet be stable enough to work on the moon's surface, Reuters reported.