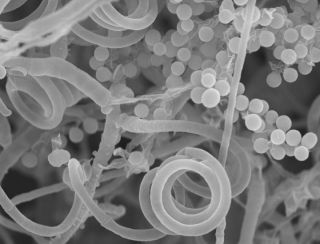 The organisms that cause toenail fungus (Trichophyton species) look much prettier under the microscope than on your feet.
(Image: © Wenjun Li and Joseph Heitman - Duke University, and Valerie Lapham - North Carolina State University)

Toenail fungus is not sexy, and the microbes that cause the infection appear to agree: A new study finds that these fungi have given up on sex — instead, they reproduce by cloning themselves.

That can have consequences for the survival of the species, the researchers said. What's more, it may also open up new avenues for medical treatments.

If the fungus, called Trichophyton rubrum, can't reproduce sexually, it can't diversify at the genetic level, which means it may one day go extinct, the researchers said. And while that would be good news for nearly 2 billion people worldwide who currently have skin and nail fungal infections, it probably won't happen anytime soon. [Tiny & Nasty: Images of Things That Make Us Sick]

"It is commonly thought that if an organism becomes asexual, it is doomed to extinction," Dr. Joseph Heitman, senior author of the study and professor and chair of molecular genetics and microbiology at Duke University School of Medicine, said in a statement. "While that may be true, the time frame we are talking about here is probably hundreds of thousands to millions of years," Heitman said.

T. rubrum is the most common cause of athlete's foot and toenail fungus. Often, people contract this infection by walking barefoot around swimming pools, showers or locker rooms, or by sharing nail clippers. The infection is often difficult to get rid of, and though most treatments — including powders, creams and prescription drugs — can keep the infection at bay, they don't clear it, the researchers said.

In the new study, the researchers examined the genetics and "mating" behavior of T. rubrum. To do so, they collected 135 different samples of the fungi from around the world. Then, they examined the microbes' genome to determine its mating type, or the molecular markers that govern whether two fungal cells can reproduce sexually.

The researchers found that 134 of the 135 samples were from the same mating type, meaning they could not mate together.

Despite this finding, the researchers then tried to coax the microbes into mating with each other — they placed samples in petri dishes along with a number of potentially compatible mating types, under a variety of conditions. But after five months, there was no evidence of sexual reproduction.

"Such incredibly high clonality across isolates from around the world is remarkable," Christina Cuomo, senior study author and a group leader for the Fungal Genomics Group at the Broad Institute of MIT and Harvard in Cambridge, Massachusetts, said in the statement.

The researchers suspect that the ability of T. rubrum to reproduce sexually may have been lost as the species became adapted to live on humans.

The study was published online Feb. 21 in the journal Genetics.