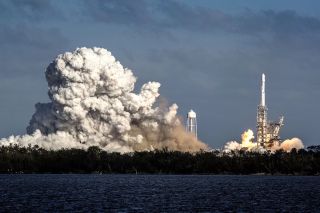 SpaceX's Falcon Heavy rocket launched yesterday (Feb. 6) in its historic maiden flight from the same launchpad that brought the Apollo missions to the moon. Besides breaking records as the most powerful rocket and spitting out a "midnight cherry" Tesla Roadster for a long and possibly violent life in deep space, the launch is a key stepping-stone in the company's quest to bring colonists to Mars.

Though SpaceX founder Elon Musk announced yesterday that the rocket is no longer in the company's planning for use with crewed missions, the reusable Falcon Heavy may still bring cargo in regular trips to the Red Planet. [In Photos: SpaceX's 1st Falcon Heavy Rocket Test Launch Success!]

Musk has been a fan of going to Mars for a long time, through many changes of NASA policy. Under the Obama administration, NASA mostly prioritized Mars as a key future destination. (NASA briefly considered sending a robotic spacecraft to collect samples from a near-Earth asteroid, but the concept was eventually dropped.)

Now, however, the Trump administration says the moon is the next destination for NASA astronauts, Live Science sister site Space.com reported. Mars will come sometime after that, the administration said.

Musk had other, different ideas: Writing in June 2017 in the journal New Space, he said that going to Mars is the only way to build a sustainable multiplanet species.

"I have nothing against going to the moon, but I think it is challenging to become multi-planetary on the moon because it is much smaller than a planet," Musk wrote. "It does not have any atmosphere. It is not as resource-rich as Mars ... in general, Mars is far better-suited ultimately to scale up to be a self-sustaining civilization."

Musk's plans — which he discusses in the New Space article and in part at a 2016 conference — outlines a system to bring a million people to Mars. Naturally, SpaceX technology will be key in that endeavor, he has said.

SpaceX has a bunch of projects on the go besides the Falcon Heavy. Today, it regularly flies a cargo spacecraft called Dragon to the International Space Station, launching it there using a more lightweight SpaceX rocket called Falcon 9. SpaceX is also building a human-rated version of the Dragon spacecraft that is expected to begin test flights later this year. Starting in 2019 or 2020, it will regularly ferry astronauts to the ISS.

These rockets and spacecraft are all pieces of the Mars plan. The idea is that a future so-called Interplanetary Transport System rocket would bring 100 to 200 people to Mars at a time. This rocket would be a more powerful version of SpaceX's Falcon 9, standing 400 feet (122 meters) tall. That would make it the largest rocket ever built, even bigger than NASA's Saturn V rocket that brought humans to the moon.

The future spacecraft itself will be incredibly large, at 162 feet (50 m) tall and 56 feet (17 m) wide. Unlike astronauts on the ISS today, the people heading to Mars would have far more of the comforts of home, Musk promised in 2016 — a restaurant, lecture halls and even movie theaters.

The powerful ITS would fly to Mars in as little as 80 days at first, and Musk said in 2016 that he thinks he can cut this to 30 days as the system improves. Over time, the ITS would also leave Earth in fleets of 1,000 or more rockets every 26 months, when the positions of Earth and Mars are most favorable for spacecraft to get there quickly. The Falcon Heavy would also participate, launching cargo toward the Red Planet every 26 months.

That's the plan, in theory.

As for what happens when the astronauts get to Mars — assuming the plan goes off without a hitch — Musk hasn't said much so far. He plans to use thrusters to land the spacecraft in some way, according to SpaceNews. Musk also said there will be a solar-powered factory on Mars to let the colonists extract carbon dioxide and water ice from the planet's soil and air. SpaceX, however, is focusing on the transportation architecture for now. So, it sounds like it will be up to the colonists to figure out how to construct their city, and what activities to perform.