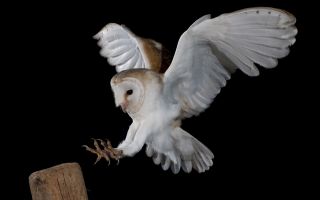 An initiative using barn owls to control agricultural pests has accomplished what real estate developer and political neophyte Jared Kushner could not — nurture an amicable, long-term collaboration that crosses borders in the Middle East.

By installing nesting boxes in locations that spanned Israel and later extended into Jordan and the Palestinian territories, researchers carved a niche for barn owls in local ecosystems, finding a method for safely eradicating rats and other rodents that plagued farmers, Nature recently reported.

The success of the program — which represents the work of Israeli, Palestinian and Jordanian scientists, and spans more than three decades — speaks to the power of conservation efforts to unite individuals across areas divided by conflicting ideology or politics, according to Nature. [Whooo's in There? Images of Amazing Owls]

Placing thousands of nesting boxes near farms, first in Israel and then in parts of Palestine and Jordan, scientists were able to cultivate populations of predatory birds that fed heartily on rats and voles — a pair of owls can eat up to 6,000 rodents in a year — thereby reducing the need for toxic pesticides by up to 90 percent, the Israeli news agency Haaretz wrote in 2015.

And the program is still expanding — a pilot collaboration between Israel and Cyprus is also underway, with 27 owl nest boxes installed and 60 more to be added this year, according to Nature.

Recently, the already fragile foundation for Arab-Israeli collaboration was dealt a severe blow when President Donald Trump announced in December 2017 that the U.S. embassy would move from Tel Aviv to Jerusalem. This controversial decision garnered harsh criticism from Arab leaders and strained relations between Israelis and Palestinians, who view East Jerusalem as occupied Palestinian territory.

But scientific alliances such as this one offer a glimpse of progress that can be made in regions racked with conflicts, hinting that mutual trust, respect and collaboration can yet bolster partnerships that prevail even against a backdrop of growing political tensions, Nature reported.

In fact, the success of the Middle Eastern barn owl program is so encouraging that researchers have expressed hope that a similar ecological project could have bridge-building impact for North Korea and South Korea, the Independent reported in March 2017.

And working with owls can be especially inspiring for fostering a spirit of cooperation, ornithologist Yossi Leshem, founder of the program and a senior researcher in the Department of Zoology at Tel Aviv University, told Nature.

"Birds have the power to bring people together, because they know no boundaries," he said.