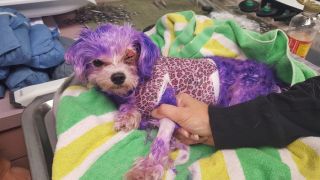 Violet, a dog in Florida, was found with most of her fur dyed purple, which caused burns and other injuries.
(Image: © Pinellas County Animal Services)

A dog suffered life-threatening injuries after its fur was colored with human hair dye, according to a Florida-based animal shelter.

The dog, a Maltese mix named Violet, was found with most of her fur dyed purple, according to Pinellas County Animal Services (PCAS), which recently shared Violet's story on Facebook. The dog was in grave condition: Her eyes were swollen shut, she had burns on her skin, and she appeared "limp and listless," the post said.

Staff at the shelter initially treated Violet with fluids and pain medication, and washed as much dye off her fur as they could. The next day, Violet was put under anesthesia as her coat was shaved off. During the shaving, the staff realized that Violet's skin was sloughing off. "It was so much worse than we initially thought," the post said.

Human hair dye contains toxic chemicals and should never be used on dogs or other pets, the PCAS said. The chemicals (which can include hydrogen peroxide and bleach) can cause a number of external injuries in pets, including burns and, if the substances get into an animal's eyes, blindness, the shelter said. In addition, because dogs instinctually lick themselves, dye on their fur could cause internal burns or poisoning, the shelter said. [7 Surprising Health Benefits of Dog Ownership]

"Only use products specifically meant for pets, or you could be putting your pet's life on the line," the post said.

After three months of treatment, which included antibiotics, IV fluids, honey treatments, scab removal and bandage changes, Violet appeared to be getting better. She began to walk and bark again. However, the staff still worried that Violet would experience complications, such as permanent blindness or infection, PCAS said.

But she recovered well and now has new owners who specialize in beautifying pets, PCAS said.