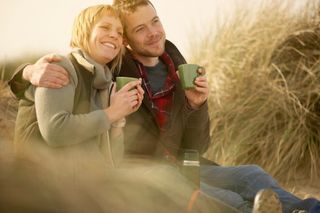 What do women want? According to one long-held psychology hypothesis, the answer to that question depends on when in her menstrual cycle you ask her: When she's not fertile, she wants a nurturing homebody. When she's ovulating, she wants He-Man.

Now, new research — available on the preprint website PsyArXiv but not yet published in a peer-reviewed journal— casts doubt on this "ovulatory-cycle-shift" hypothesis. Heterosexual women aren't especially drawn to masculine hardbodies when they're fertile, the study finds. Instead, they just think all guys are a little hotter at this time.

"We simply found that all men that we had were slightly more attractive when women were in their fertile window," said study researcher Julia Jünger, a doctoral student at the University of Göttingen in Germany. "They did not really distinguish between masculine or not-masculine men." [Macho Man: 10 Wild Facts About His Body]

The power of the menstrual cycle?

Psychologists who study human evolution and how hormones impact the human psyche have been arguing for years about how and whether the menstrual cycle affects how women act. Research dating to the late 1990s suggested that when fertile, women became more attracted to macho, high-testosterone men — think bulging muscles and chiseled jaws. But in the nonfertile phases of their cycle, they seemed more open to  feminine men. Perhaps, evolutionary psychologists said, women evolved to clinch long-term relationships with sensitive sorts while cheating on their mates during fertile periods to secure "better" genes for their offspring.

This was a controversial idea, of course.

And the research backing it up was no less controversial: Most studies involved asking women when they'd had their last menstrual cycle and then extrapolating based on a 28-day calendar when they would be fertile. Fertile and nonfertile women were then asked to rate pictures of macho and not-so-macho men based on attractiveness.

The problem, Jünger told Live Science, is that women's cycles vary widely, so counting the days from the last or subsequent period can't prove for certain that she was ovulating or fertile on any given day. Many studies also used very small sample sizes of women — so small, Jünger said, that in many cases they shouldn't have been able to statistically uncover the results they claimed to find. This led Jünger and her colleagues to suspect that many of the studies reporting a change in masculinity preferences over the menstrual cycle might simply be false positives, or statistical flukes.

A final problem is that many studies tried to control for outside variables like skin tone or health by using computer-generated images, Jünger said. These CGI male bodies weren't always realistic.

In the new study, Jünger and her team decided to tackle all of these problems. First, they gathered 157 women between ages 18 and 30 and asked them to come to the laboratory to rate images of male bodies four times across two menstrual cycles, twice when fertile and twice when not fertile. To make sure they could pinpoint ovulation, the researchers measured key ovarian hormones in the women's urine and saliva on test days. They also used saliva to measure testosterone, which varies throughout the menstrual cycle, and the stress hormone cortisol. Finally, the researchers used images of male bodies taken from photographs of 80 real-life guys in their skivvies. The team also "preregistered" all their methods and hypotheses by uploading them to an open-science website, a move meant to increase transparency and honesty about scientific research.

"We can't change anything, so we really had to stick to that plan," Jünger said.

The results? Overall, women find macho guys hot, the researchers found. Male bodies that were more masculine were rated more attractive, in general. Unsurprisingly, stress seemed to be a libido killer, as women with higher cortisol levels rated all dudes as less attractive then women with lower cortisol levels.

During fertile phases, the macho guys still topped the charts, the researchers found. But there was no evidence of a change in preference for types of bodies, Jünger said. Overall, all the guys looked a little hotter to women peering through fertility-tinted glasses. [Busted! 6 Gender Myths in the Bedroom & Beyond]

But there was a catch: That was only true for women in relationships. Singles didn't change their attractiveness ratings across the cycle.

It's a mystery as to why only coupled-up women might be drawn to macho bodies when fertile, Jünger said. One possibility is that they simply face less risk from sex than singles — for example, there might be less chance of a sexually transmitted infection in a monogamous relationship or less risk of being left high and dry should they get pregnant, for example.

Another possibility is that women in relationships might have slightly different hormone profiles than single women, said James Roney, a psychologist at the University of California, Santa Barbara, who was not involved in the current study.

"If that were the case and the hormones are driving the effects, you're just more likely to see the effect" in women in relationships, Roney told Live Science.

The study undermines the notion of fertile women as evolutionarily programmed to cheat, Roney said, calling the new research "really well-done." Ideally, he said, there will be more research on masculinity and female preference to show whether the ovulatory-shift hypothesis is truly dead.

Jünger agreed, pointing out that there are other types of masculinity, like angular facial features and deep voices, that her study didn't address.

However, there's a growing body of evidence that women's interest in masculinity doesn't shift with hormones, said Benedict Jones, a psychologist at the University of Glasgow who was not involved in Jünger's study. He and his team will soon publish research in the journal Psychological Science finding that women don't prefer more manly faces when they're fertile, either.