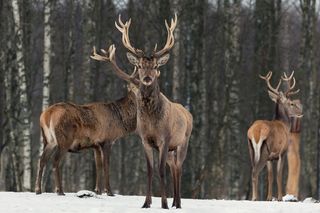 Deer in at least 22 U.S. states and parts of Canada have died from a neurological disease called "chronic wasting disease," according to the Centers for Disease Control and Prevention (CDC). But could this illness, which is sometimes dubbed "zombie deer disease," spread to people, just as "mad cow disease" has done in the past?

Chronic wasting disease can cause a number of symptoms in animals, including drastic weight loss, a lack of coordination, drooling, listlessness or a "blank" facial expression, and a lack of fear of people, according to the CDC. It infects members of the deer (cervid) family, including white-tailed deer, mule deer, reindeer, moose and elk.

The disease was first discovered in Colorado in 1967, according to the CDC, and so far, no cases in humans have ever been reported.

Indeed, the infectious proteins that cause chronic wasting disease — called prions — don't easily jump between species, said Mark Zabel, associate director of the Prion Research Center at Colorado State University. But it's known that these proteins can evolve to infect other species, Zabel said. For example, the type of prion that causes so-called bovine spongiform encephalopathy, or "mad cow disease," was transmitted to people who ate infected meat (mostly in the United Kingdom in the 1980s and '90s), resulting in several hundred human infections.

"We have every reason to suspect" that chronic wasting disease could pass to humans, Zabel told Live Science. The disease "may still be evolving, and it may be just a matter of time before a prion evolves in a deer or elk that is capable of infecting a human, he said." [10 Deadly Diseases That Hopped Across Species]

Recently, researchers in Canada raised concerns about the possibility that the disease could jump to humans, after a study showed that macaque monkeys could get the disease from eating infected meat. Out of five monkeys that were fed infected white-tailed-deer meat, three tested positive for chronic wasting disease, according to The Tyee, a Canadian news outlet. This is the first time that the disease has been found to spread to primates through the consumption of infected meat, according to the Associated Press.

Infectious prions cause disease when they start to fold abnormally and trigger the misfolding of other, similar proteins. Studies by Zabel's lab and others have shown that the prion proteins that cause chronic wasting disease are "flexible," meaning they can "adopt many different shapes relatively easily," Zabel said.

Moreover, some studies have shown that researchers can artificially evolve the prions that cause chronic wasting disease (either in a test tube or animal models) so that the altered prion proteins can cause human proteins to misfold, Zabel said.

This suggests that if chronic-wasting-disease prions evolve in nature, they could potentially cross the species barrier, he said.

Should you eat deer meat?

About two-thirds of U.S. residents say they've consumed venison or elk meat, according to the CDC. But should they be concerned about possibility of chronic wasting disease spreading to humans?

The CDC recommends that, in areas where chronic wasting disease has been found in animals, hunters strongly consider having their game tested before eating the meat.

Zabel, who noted that he eats venison when it's served in a restaurant, agreed with the CDC's recommendation.

"If I were a hunter, I would definitely have my deer tested," Zabel said.

The CDC also recommended that hunters do not shoot or handle meat from deer or elk that look sick or act strangely. But it's important to note that even deer that appear healthy could have the disease, because it can take years for symptoms to appear, the CDC said.