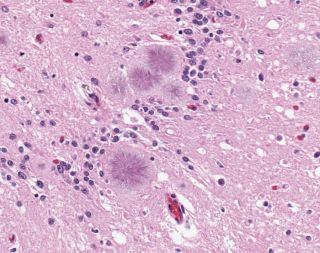 Mad cow, scrapie and Creutzfeld-Jakob disease are all diseases of the brain that debilitate before they kill, and have no cure, or even many good treatment options beyond supportive care. But now, researchers in Switzerland say it's possible to block the misfolded proteins called prions that cause these diseases, by using a compound that biologists have used to track other molecules.

Prions are a distinct type of protein — they can self-replicate, said Adriano Aguzzi, professor of neuropathology at the University of Zurich, who led the study. When a prion comes into contact with a normal protein, it makes the normal protein alter its shape, and become a prion, too. Mad cow and scrapie affect cows and sheep, respectively, and Creutzfeld-Jakob disease (CJD) affects people.

In the new study, Aguzzi's team used chemicals called luminescent conjugated polythiophenes, which are fluorescent compounds that researchers often use to stain tissue samples, so they can see what's happening in cells. The team first infected mice with a prion disease, then injected them with polythiophenes.

They found that some polythiophenes extended the mice's survival by more than 80 percent, compared with control mice that were not injected with polythiophenes.

This meant some mice survived up to 140 days after infection if they got the polythiophene before being infected with prions, and up to 100 days if they were treated once infected. "I was pretty surprised it worked so well," Aguzzi said.

Infectious prions get into the brain after people or animals eat food that is contaminated with them. Eventually, the proteins replicate to the point where they form plaques that can kill brain cells, and give the brain the "spongy" appearance that is characteristic of prion diseases (the diseases are formally called transmissible spongiform encephalopathies). [10 Things You Didn't Know About the Brain]

Exactly how prions kill the cells is still under some debate, Aguzzi said, but there's no doubt that the proteins replicate rapidly once they start linking up with certain proteins in brain cells, and it only takes a few prions to start the process.

Prions are also really hard to get rid of. The molecules are tightly bound, even boiling-water temperatures won't break them up.

In the study, Aguzzi said the team did extensive computer simulations of how the molecules interact before they injected them into the animals, to learn the "rules" of how the chemicals interact with prions.

The work builds on experiments done by Beat Meier, a researcher at Switzerland's Federal Institute of Technology, Aguzzi said. Meier used molecular imaging to discover the structure or infectious prions in 2008. "Nobody looked at binding before, because nobody knew the structure of a prion before."

Another step was a project studying a completely different problem. Peter Nilsson, a chemical biologist at Linköping University in Sweden, was experimenting with conductive plastics, but found a chemical that he thought might bind with prions.

Computer simulations showed that the polythiophenes could indeed fit into a space found on one end of a prion, and block it from connecting with normal proteins.

It remains to seen whether polythiophenes could be given safely to people — their toxicity is not yet known, and even further away are tests studying whether they may be effective in helping people with CJD.

The substances described in new study are not necessarily the ones that will enter into humans," Aguzzi noted. However, the new findings show that there's a pathway to making molecules that could stop the diseases prions cause.