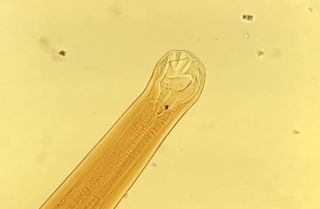 Editor's note (Feb. 22): The journal BMJ Case Reports has retracted this case report. According to the notice, the article was removed "voluntarily at the request of the patient concerned."

A husband and wife returned home from a Caribbean cruise with identical souvenirs from their vacation:  parasitic infections that caused itchy, red rashes on the couple's backsides, according to a report of their case.

After sunbathing on a sandy beach in Martinique one afternoon, the wife said she felt a burning sensation on her rear end. By the next day, this irritation had blossomed into an extremely itchy rash with "red pinprick marks," according to the report, which was published Jan. 13 in the journal BMJ Case Reports.

The woman's husband also developed a rash on his backside after spending time with his wife on the beach. So, the British couple sought help from the medical staff on the cruise ship, who prescribed antibiotics and anti-fungal medications, as well as a steroid cream to relieve the rash and quell the itchiness, the report said. [8 Awful Parasite Infections That Will Make Your Skin Crawl]

But these treatments didn't help, so when the couple returned home from the cruise, they went to the hospital. By this point, it had been 10 days since they'd sat on the Martinique beach.

When doctors at Addenbrooke's Hospital in Cambridge, England, examined the 52-year-old woman, they saw a wavy, red rash on her bottom. Her husband had a similar-looking rash on his backside, and doctors diagnosed both of them with "cutaneous larva migrans," according to the case report.

This is a skin condition caused by a hookworm infection. The most common culprit for the infection in the Caribbean is the hookworm Ancylostoma braziliense, according to the case report.

Larvae on the beach

People can pick up the parasite after encountering hookworm larvae; these can be excreted in the feces of an infected animal, typically a dog or cat, onto sandy beaches or moist soil, the report said.

A high percentage of dogs and cats are infected with hookworm, especially strays, said Dr. Peter Hotez, the dean of the National School of Tropical Medicine at Baylor College of Medicine in Houston, who was not involved in the couple's case. When these animals defecate on the beach, hookworm larvae can easily migrate through the sand, he said.

But Caribbean beaches aren't the only places you can find hookworms; some beaches along the Gulf Coast of the U. S. and the Atlantic seaboard may also be teaming with the parasites, Hotez told Live Science. [10 Ways the Beach Can Kill You]

For a person to become infected with hookworm, there has to be direct contact between the skin and the larvae of the worm, Hotez said. That means that walking barefoot on contaminated beach may cause the infection. Hotez said he speculates that this couple may have sat bare-bottomed on the sand, or the sand may have gotten into their bathing suits.

Once a hookworm larva penetrates a person's skin, it can burrow around, leaving a trail-like rash of inflamed skin known as a "creeping eruption," Hotez said. Sometimes, the rash can have a winding appearance, as was the case for this couple, or sometimes it can look like lines on the skin, he noted. (The species of hookworm that is thought to have infected the couple can't reproduce in humans; as a result, when the worms infect humans, they typically burrow around in the skin until they die, Live Science previously reported.)

Doctors prescribed anti-parasitic medication to the husband and wife, according to the report. But five days later, the woman went to the emergency room because she was experiencing shortness of breath, a dry cough and chest pain. Her husband also developed a dry cough.

A small percentage of people with cutaneous larva migrans may get symptoms in their lungs, Hotez said. When this occurs, it means the larvae got into the bloodstream and were carried to the lungs, he said.

A chest X-ray can show if the larvae have infiltrated the lungs, Hotez said. And indeed, there was evidence of this in both the man and the woman, according to the case report.

Lung-related symptoms tend to happen when there is significant exposure to hookworm larvae, Hotez noted; in other words, a person would have to be infected with a large number of larvae.

The couple was given a second dose of anti-parasitic medication, and the treatment quickly helped clear up their skin as well as their lungs, according to the case report.