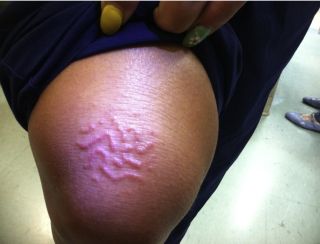 The itchy rash on the woman's knee had a raised, snake-like appearance.
(Image: © Courtesy of Elsevier Inc. 2017)

A Caribbean vacation sounds like a pleasant way to pass the time and catch some rays, but a Pennsylvania woman returned with more than a beachy glow: Two weeks after coming home, she developed a raised, itchy rash on her knee, which turned out to be the result of a parasite burrowing beneath her skin, according to a recent case report.

The 45-year-old woman's rash was "textbook example" of a type of parasitic infection called cutaneous larva migrans, said Dr. Chaiya Laoteppitaks, an emergency medicine physician at Albert Einstein Medical Center in Philadelphia and the senior author of the case report.

The wavy, snake-like lines that appear on the skin are the trail left behind by the parasitic worm as it burrows around beneath the skin, Laoteppitaks told Live Science. [Here's a Giant List of the Strangest Medical Cases We've Covered]

Cutaneous larva migrans is caused by a hookworm infection, according to the case report, which was published online April 8 in The Journal of Emergency Medicine.

Hookworms are normally found in warm, moist climates, Laoteppitaks said. Normally, a hookworm infects a person when the worm's larva burrows into the skin, Laoteppitaks said. The larva travels through the body, and eventually makes it to the small intestines, where it develops into an adult and lays eggs, according to the CDC. These eggs are expelled from the body in a person's stool, and the life cycle can start again, the CDC says.

But in the woman's case, the infection was caused by a hookworm that doesn't normally infect humans, Laoteppitaks said. There are two hookworm species that may have been responsible for the woman's infection: Ancylostoma braziliense or Ancylostoma caninum, according to the report.

These are hookworms that normally infect dogs and cats — humans aren't a "definitive host" for the worms, Laoteppitaks said.

That means that if one of these hookworms ends up in a human, it's the end of the line for them: Because they can't complete their life cycle, the worms just burrow through the skin for a while until they eventually die, Laoteppitaks said. But when the human immune system attacks the worm, it causes intense itching, he said. In the medical literature, the type of rash is sometimes called "creeping eruption," according to the report.

The worms can move a couple of centimeters each day, and in some cases, a person can actually observe the line of the rash extending, he added. When this happens, it's possible for doctors to perform a biopsy and find evidence of the worm, he said.

The woman was treated with an antiparasitic drug, and Laoteppitaks noted that she is now doing quite well.