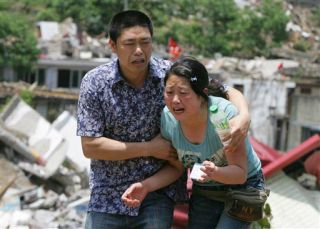 A woman grieves for her lost mother in Beichuan, in China's southwest Sichuan province, Sunday May 18, 2008.
(Image: © AP Photo/Greg Baker.)

After the 8.8 magnitude earthquake struck Chile on Saturday, reports of looting were quick to follow, with officials needing to instigate curfews and dispatch thousands of troops to ease what Chile's President Michelle Bachelet called the "pillage and criminality" throughout the region.

Such news reports might make it seem as though people can become more selfish in a natural disaster, loosening their morals and adopting an "every man for himself" mentality. But experts say the situation isn't so black and white.

People may be taking food and supplies they need for survival, actions most people would find excusable given the circumstances, said Daniel Kruger, a social and evolutionary psychologist at the University of Michigan's School of Public Health. And if people do take non-necessities, such as TVs, they're probably not thinking about right and wrong since these uncertain situations can lead to a breakdown of social norms, he said.

And cases of looting are many times not as rampant as news reports suggest, according to a large body of research, said Kathleen Tierney, a professor of sociology and director of the Natural Hazards Center at the University of Colorado at Boulder. In fact, looters make up only a small fraction of those affected by the disaster, and the majority of people act altruistically, she said.

Such alliance through adversity makes sense in terms of our evolutionary history. "There's an incentive for people to band together, because through mutual cooperation you might have a greater chance of surviving," Kruger told LiveScience.

It's important to distinguish between taking resources for survival and non-essential luxury goods, Kruger said. With normal life disrupted, and no way to pay for the goods, people may just take what they need to keep living. "You could debate whether that is really stealing," he said.

And if the looting spills over into luxury items, people are probably less likely to steal from someone's house than they are from a large department chain store, where the entity you are taking from is more anonymous.

"I think one of the factors is personalization. Is this an individual you're helping or hurting, or is it more abstract: 'This TV belongs to this store that belongs to a corporation?'" Kruger said.

Also, our view of looting may be affected by a double-standard so to speak — studies show that humans are often moral hypocrites, judging others more harshly than themselves.

The media reports of looting might also present a skewed view of reality.

"There is considerable research evidence going back to the times that disasters first started to be studied, which was more than 50 years ago, that looting is not a major problem in disaster situations," Tierney said.

In fact, a recent study found that many reports of looting after Hurricane Katrina were based on secondhand accounts, and that there was likely no looting in the traditional sense, according to the researchers of this 2008 study published in the journal Disaster Prevention and Management.

An altruistic response is by far more common after a disaster, Tierney said. "This is true across the board, in various regions of the world, in disasters of various kinds," she said.

And many times the helpers are ordinary citizens in the region. Tierney notes the example of the "Cajun navy," a group of people with fishing boats who organized themselves and rescued thousands during the aftermath of Hurricane Katrina, she said.

However, Kruger thinks that in these situations, you will see a combination of cooperation and selfishness. "People will be digging strangers out of the rubble at the same time that others down the street might be stealing a television from a store," he said.

But Kruger agrees that "there probably is a lot of helping going on."

"If we were absolutely selfish when disasters like this strike, I would be surprised if we survived as a species."