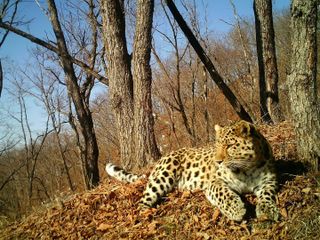 A healthy Amur leopard reclines in the park where the sick leopard was found.
(Image: © Land of the Leopard National Park)

A critically endangered Amur leopard (Panthera pardus orientalis) turned up along the side of a road in eastern Russia, suffering from a disease that typically infects domestic dogs.

Amur leopards, also known as Far Eastern leopards, are extraordinarily endangered. As few as 60 individuals remain in the wild, according to a paper published today (Jan. 17) in The Journal of Wildlife Diseases describing the find.

And the find is surprising. The disease, called canine distemper virus (CDV), infects many animals besides dogs, but it is rarely found in cats. Research published in 2001 in the journal Clinical and Vaccine Immunology suggests that when cats do catch CDV, it's usually because they've been in close contact with dogs. [Facts About Leopards]

The approximately 2-year-old wild female was spotted on May 8, 2015, close to a road running through Russia's Land of the Leopard National Park, according to the paper.

"On initial approach, the leopard showed a lack of fear toward people and vehicles and an indifference to its surroundings," the authors wrote.

A team of conservationists gave the 61-pound (28 kilogram) big cat drugs to immobilize it, then hauled it back to a care facility. Despite caregivers' efforts, the leopard refused food and water. It developed "uncoordinated" movements and "severe hind limb contractions" that couldn't be controlled with medicine. As the creature's condition deteriorated, caregivers made the decision to euthanize the cat.

That the leopard had CDV is a big deal, the researchers wrote, because the more a species' population dwindles, the more susceptible it is to shocks from disease outbreaks. CDV spreads more easily among social cats such as lions when big-cat outbreaks do occur, but the new paper suggests that it's still a significant threat to the more solitary Amur leopard.