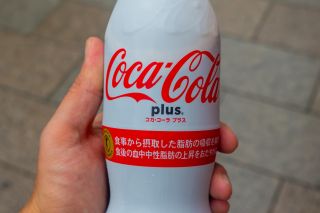 The Japanese government has given a "gold label" to the soda Coca-Cola Plus, a designation meant to certify the drink's "health benefits," The Wall Street Journal reported Sunday (Jan. 7).

Coca-Cola Plus (which isn't available in the United States) contains an additional ingredient — one that The Wall Street Journal calls a laxative.

In fact, the zero-calorie drink contains dextrin, a dietary fiber. Although dietary fibers such as dextrin can have laxative effects, they aren't laxatives as most people think of them. Instead, in appropriate doses, dietary fibers can help calm and regulate the human digestive system. It's not entirely clear from The Wall Street Journal's reporting whether the Japanese government awarded the drink the gold label because of the supposed laxative effect. [Dieters, Beware: 9 Myths That Can Make You Fat]

Dextrin is often sold in the U.S. as a health supplement, with some less-trustworthy companies and health blogs suggesting that it might "absorb fat."

In reality, as Joanne Slavin, a nutrition researcher at the University of Minnesota, explained in a 2013 paper published in the journal Nutrients, fibers such as dextrin do appear to have positive benefits for heart and gut health. In large doses, though, as The Wall Street Journal also reported, dextrin can cause painful gas and bloating. It's also not clear that soda is a particularly healthful delivery mechanism.

If the Japanese government were encouraging people to use Coca-Cola Plus as a weight-loss laxative, the government would be making a mistake. As Live Science reported in 2014, trying to poop yourself thin will probably make you sick, but it won't make you skinny.