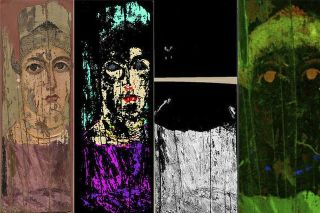 More than 1,800 years ago, an artist in ancient Egypt painted the portrait of a large-eyed woman wearing a red tunic — a painting that was found on the woman's dead, mummified body.

The identity of the mysterious lady in red may never be known. But thanks to a new, noninvasive technique, scientists have uncovered the materials and methods the artist used to capture the woman's likeness in unprecedented detail. Even down to the special spoon used to paint her hair, and the order in which each type of paint was applied.

"Without even taking a minute sample from the painting, we mapped out detailed information that tells us exactly what materials were used, and how they were prepared," study senior author Ioanna Kakoulli, a professor of materials science and engineering at the University of California, Los Angeles (UCLA), said in a statement. "We were also able to link their production technology to other ancient 'industries' and practices, such as mining, metallurgy, pottery, dyeing, pharmacopeia and alchemy."  [11 Hidden Secrets in Famous Works of Art]

The approach incorporates three known practices: hyperspectral diffuse reflectance (studying the reflection of light and other waves from a surface), luminescence (light emission) and X-ray fluorescence (identifying chemicals in a sample using the X-rays that reflect off an object), according to the study, published online Nov. 14 in the journal Scientific Reports.

The researchers used the technique to analyze this second-century woman's portrait, known as a Fayum mummy portrait — a painting on a wooden board affixed to a mummy that likely depicts the deceased person.

An analysis of the 13.7-inch by 4.7-inch (35 by 12 centimeters) portrait, housed in the National Gallery of Art in Washington, D.C., revealed the molecular composition of the paint, as well as the material used to bind the paint: a mixture of beeswax and pigment, the researchers found.

For instance, the woman's portrait was likely painted with three different tools: a fine painter's brush, or penicillus; a metal spoon or hollowed spatula known as a cauterium; and an engraver, known as a cestrum, the researchers wrote in the study.

They also discovered what might have been fashionable and artistically popular at the time the painting was created.

"The decoration of her garment is an excellent example of craftsmanship in real life being reflected within the painting," study co-author Roxanne Radpour, a doctoral candidate in the Materials Science and Engineering Department at UCLA, said in the statement. "Madder [red] dye extracted from roots was often used to color textiles and leather in ancient Egypt, and we see from the chemical mapping of the portrait that the artist chose to paint the noblewoman's dress with madder lake pigment, thus imitating contemporary practices."

The new technique may also have applications in environmental, geological, biological and forensic sciences, the researchers said.