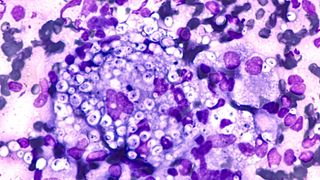 An uncommon fungal infection appears to have lingered in one man's body for 30 years before making itself known in his brain — and a heart transplant may have played a role in making him sick, a new report of the man's case reveals.

The 70-year-old man was diagnosed with histoplasmosis, an infection caused by inhaling the spores of a fungus called Histoplasma capsulatum.

Histoplasma is common in some parts of the U.S. — namely, around the Ohio and Mississippi River valleys — but not in the Southwest. Indeed, the case is unusual because the man lives in Arizona and he did not spend much time outside of the state. He likely picked up the infection during a brief visit to North Carolina three decades earlier, according to the case report, which was published Nov. 8 in the journal BMJ Case Reports.

Histoplasmas spores live in soil that may contain bird or bat droppings, and people can inhale these spores after dirt or dust containing the droppings gets disturbed, according to the Centers for Disease Control and Prevention (CDC). This can happen during activities, such as cleaning chicken coops, exploring caves, and landscaping or demolishing old buildings, the CDC says. [10 Bizarre Diseases You Can Get Outdoors]

Histoplasmosis usually affects a person's lungs and causes flu-like symptoms, such as a fever, cough and fatigue, the CDC says, but the fungus can also spread to other organs.

But not everyone who inhales the spores gets sick, according to the CDC. In this man's case, he may have been more vulnerable to the infection because he was a heart-transplant recipient who received a donated organ in 1986.

The man's heart transplant wasn't the source of the infection, but it may have been the reason the histoplasmosis infection was reactivated, said Dr. Carol Kauffman, an infectious-disease expert at the Veterans Affairs Ann Arbor Healthcare System in Michigan. Kauffman was not involved in the man's case, but has written extensively about histoplasmosis.

After an organ transplant, people must take drugs to suppress the immune system so that the body doesn't attack the new organ. These medications lowered the man's immunity and allowed the fungal spores that lay dormant in his body to grow again, Kauffman told Live Science.

The man learned of his infection when he went to see infectious-disease experts at the University of Arizona Health Sciences Center in Tucson because he had been feeling confused for four days, according to the case report.

Brain scans of the man's head revealed abnormal brain tissue, leading doctors to think that he might have had a tumor. Additional tests revealed that the man also had abnormal growths on his adrenal glands, which produce a variety of important hormones.

The doctors then performed a biopsy of the adrenal glands — which are located on top of a person's kidneys — and found areas of inflamed, dead tissue, which can be a symptom of histoplasmosis, according to the case report.

Lab tests and a fungal culture confirmed the man's diagnosis of disseminated histoplasmosis, the more severe and rarer form of the disease. ("Disseminated" means that the disease spread beyond the initial location of the infection, in this case, the lungs.)

Indeed, the man's initial symptoms — confusion and an "altered mental status" — were likely the result of the infection spreading to his brain, Kauffman said.

The case report authors said that histoplasmosis was an unusual diagnosis, considering that the man could recall only a short visit, more than 30 years earlier, to North Carolina, which is an endemic area, meaning an area where the disease is seen more regularly.

Kauffman noted that the report doesn't provide all of the details needed to know how the man first picked up the infection. For example, he might not remember all of his travels; and if he drove to North Carolina, he could have stopped along the way in endemic areas, she said.

The fungus can be in the soil in many places, and a person can be exposed to it without having a history of being in contact with birds, bats or caves, Kauffman said.

The man was given an antifungal medication to treat the infection, according to the case report.