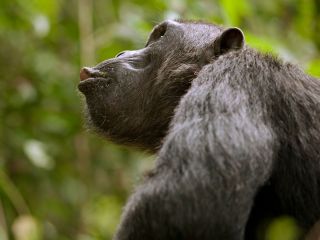 Scientists found that chimps will warn their fellows more persistently when they appear unaware of a threat.
(Image: © Duncan McKay/Alamy)

If you saw someone step into the street, oblivious to a car speeding toward them, you might yell or wave your arms to get their attention and let them know that they were in danger.

And now, scientists have discovered that chimpanzees perform similarly exaggerated warning calls and gestures when members of their group are unaware that they are in peril.

Researchers already knew that chimps would look out for each other and call out to alert other group members of threats. But in a recent study, they learned that these primates' signals are more sophisticated than once thought, with chimps increasing the urgency of their warnings if the other chimpanzees appear ignorant of danger, adjusting their communication in a way that was once thought to be uniquely human. [8 Human-Like Behaviors of Primates]

Previous research showed that chimps in experiments with humans modified their communication tactics when signaling for food depending on circumstances. They would vocalize more frequently if a person was standing with their back to them or had closed eyes. And they would gesture more often if the person was facing them and had their eyes open. If a person was standing near the food, the chimps used different sounds than if the food was unattended, the scientists reported.

For the new study, the researchers tested whether chimps would modify how they communicated to reflect a threat from a predator. They modeled snakes from wire and plaster, and painted them to resemble a local viper. They then concealed the fake snakes on a path in Uganda's Budongo Forest where chimpanzees were likely to encounter them, and documented the chimps' responses as they passed by.

In the first experiment, the scientists merely observed the chimps as they interacted with the "snake" and with each other. Chimps that spotted the fake snake gave an "alert hoo," a call used as a response to threats. Some also performed a behavior known as "marking," using their bodies to show other chimps where the threat was located, by looking back and forth from their fellows to the snake.

Both warnings inspired caution in the other chimps, who avoided the area within biting range of the snake, the study authors wrote.

For the next set of experiments, when solitary chimps or chimps in small groups neared the snake, the researchers used concealed speakers to play recorded chimpanzee calls — either a neutral hooting sound, known as a "rest hoo," or the more urgent alert hoo.

If the chimp subject heard a rest hoo before seeing the snake — hinting that other chimps were unaware of the threat — their hooting and marking was more persistent, the scientists noted.

Since informing the unseen chimps about the snake threat offered no visible benefit to the signaler, it seemed that they issued the warning exclusively to help the chimps that they heard but could not see, according to the researchers.

Although chimps have a limited vocal repertoire compared with humans, the study's findings suggest that they can communicate in ways that respond to specific social situations, hinting that this aspect of language emerged earlier in our primate lineage — perhaps with our last shared ancestor 8 million years ago, the study authors reported.

The findings were published online yesterday (Nov. 15) in the journal Science Advances.