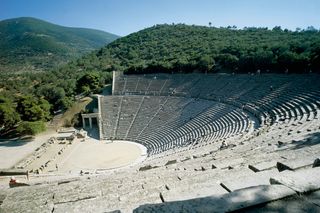 Speak up, the people in the cheap seats can't hear you.
(Image: © DEA/G.DAGLI ORTI/De Agostini/Getty)

If you were sitting in the upper rows of the ancient Greek amphitheater of Epidaurus 2,300 years ago, could you have heard the whisper of an actor's sigh, or the crackle of a match as it flared to life, as accounts have claimed?

Probably not, according to a new study.

Despite extravagant descriptions of amphitheaters' superior sound quality, these impressive-looking open-air theaters from the ancient world may not have been acoustic marvels after all. A team of researchers with the Eindhoven University of Technology (EUT) in the Netherlands recently conducted the first on-site experiments at three Greek amphitheaters that are thousands of years old. They found that while a person speaking loudly could be heard in the most distant seats, most quiet sounds would have been inaudible even to those seated right next to the stage. [The 25 Most Mysterious Archaeological Finds on Earth]

The Epidaurus theater held 55 semicircular rows of seats that could accommodate up to 14,000 people, and, according to research published in 2007, even unamplified performances were easily heard in the farthest rows. Sound carried exceptionally well due to the slope of the walls and acoustic properties of the limestone seats, according to the researchers of the 2007 study.

But the EUT scientists' interest in the Epidaurus amphitheater's acoustics was piqued by a more grandiose description in a travel guide published in 1989, which declared the sound to be "extraordinary" in no uncertain terms. According to the book, people seated in the theater's last row — about 194 feet (59 meters) from the stage — could hear the smallest sounds "where the tour guide whispers, walks around, tears a piece of paper, lights a match, beats his chest, snaps his fingers, turns a page of a book, drops a coin and sighs heavily."

To find out if these claims were true, the researchers conducted the first acoustic maps of ancient amphitheaters, visiting the Odeon of Herodes Atticus, which dates to A.D. 200; the theater of Argos, dating to 200 B.C., and the Epidaurus theater, dating to 400 B.C. The scientists brought wireless acoustic measuring tools they designed themselves, gathering over 10,000 measurements from hundreds of locations in the three theaters, according to a video shared by EUT on YouTube.

They found that the theater acoustics, while good, were not as extraordinary as the guide book claimed.

Voices that were projected loudly were audible in the farthest seats. But voices at a normal volume were less intelligible, the scientists found. And contrary to the guide book's claims, the sound of ripping paper and the ring of a dropped coin were audible for a distance extending only about halfway up the seating area. And a struck match or a whisper would have been heard only by those in the very front row, according to the EUT statement.

"Using the sound sources mentioned, no evidence of the often claimed exceptional sound transmission was found," the researchers reported in a summary of their study, presented June 28 at the Acoustical Society of America's "Acoustics '17" conference in Boston.