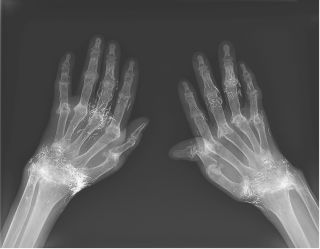 The bright white threads, clustered around the wrists and finger joints, are made of gold.
(Image: © The New England Journal of Medicine ©2017. )

It's a medical treatment that Louis XIV, the French king who presided over the gold-drenched Palace of Versailles, might have liked: gold-thread acupuncture.

That's what led to an X-ray image of a South Korean woman's hands that appear to be glowing with gold filaments, according to a new report of the woman's case. The glowing threads, which are clustered around the woman's wrists and finger joints, are in fact made from gold, according to the case report, published today (Nov. 8) in The England Journal of Medicine.

The X-ray was taken in April 2014, when then 58-year-old woman went to a rheumatology clinic for long-standing joint pain in her hands and feet. She told the doctors that her joint problems had begun about 50 years earlier, when she was 18. Then, when the woman was 48, she was diagnosed with rheumatoid arthritis, a painful condition in which the immune system attacks the linings of a person's joints. Left untreated, the condition can lead to deformities in the joints.

The woman said that since her pain began, at age 18, she had taken ibuprofen for her symptoms, according to the report. [27 Oddest Medical Cases]

The practice has "long been used to treat joint pain" in East Asia and worldwide, the report's authors wrote.

But the woman's case presented a couple of striking elements: the severity of her rheumatoid arthritis, which caused joint deformities in her hands and feet, and that the "gold threads were inserted at almost every deformed joint" in her hands, said Dr. Kyung-Su Park, a rheumatologist at St. Vincent's Hospital in South Korea, who treated the patient.

Though striking, the gold threads don't seem to have made the woman's problems any worse, Park said. "I don't think gold thread is associated with [the] development or progression of [rheumatoid arthritis], nor [the] aggravation of joint pain," Park told Live Science.

"Surprisingly, there are few reports about the adverse effects of gold-thread acupuncture," Park said.

Rather, the woman's condition likely became so severe in part because using the alternative treatment meant she avoided standard medical care, Park said. She "depended on traditional medicine such as acupuncture instead of getting proper medical treatment with anti-rheumatic drugs" in the early stages of the disease, Park said. In addition, he noted that the woman had other risk factors, such as high levels of certain proteins in her blood, that are well-known risk factors for joint deformities with rheumatoid arthritis.

For treatment, the doctors recommended that the woman change the medicines she was taking (she had been taking prescribed drugs for rheumatoid arthritis since age 48). Doctors also performed surgery on her feet to reduce joint pain, according to the report.

But the gold threads were left in place: The doctors didn't remove them as part of the woman's treatment, Park said.

Park added that he last saw the woman one month ago and noted that "she is doing well these days."