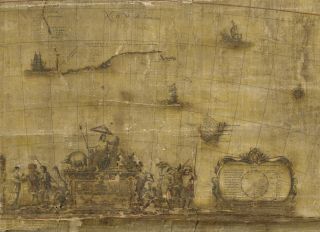 "Archipelagus Orientalis" has been described as the most important European map of Australia before the arrival of the British.
(Image: © National Library of Australia)

A rare map of Australia from the 17th century —before Europeans had fully explored the continent —resurfaced after 350 years. Now, it's finally been restored and put on public display in Australia's capital, Canberra.

Dutch cartographer Joan Blaeu created the map called "Archipelagus Orientalis," or "Eastern Archipelago," in 1659. (This newfound copy was printed in 1663.)

Much of the eastern coastline of the continent is missing in this vision of Australia. But the map is notable for including the earliest details of the sighting of Tasmania by the seafarer Abel Tasman, who planted a Dutch flag on the island during his expedition aboard the Zeehaen in 1642. [Amazing Images from Australia's 'Lost World']

"Archipelagus Orientalis"has been described as the most important European map of Australia before the arrival of the British. It was created more than 100 years before Captain James Cook sailed uncharted parts of the Pacific Ocean, and completed the map of Australia's coast. Only a handful of complete copies of Blaeu's map are known to exist.

This copy turned up in a Stockholm storage facility in 2010, in the estate of an antiquarian bookseller. The map was sold at an auction, and then acquired by the National Library of Australia in 2013. After a long conservation effort, the library announced that the map is now on display in its headquarters in Canberra until mid-2018.

The delicate map measures more than 5 feet (1.5 meters) in width. It has letter-pressed text around the outside telling the story of Tasman's voyages. The map had been printed on paper and mounted on cloth, and some pieces were cracking, flaking off or missing when it resurfaced. It required years of conservation work before it was ready for display.

The map is believed to have gone into storage in Sweden in 1950, when the antiquarian bookseller who owned it went out of business, according to news.com.au. But not much is known about the map's whereabouts before then.

"The fact it survived at all is remarkable, and probably owes much to the fact no one knew it existed for about a century," Ryan Stokes, chair of the National Library of Australia Council, said in 2013.