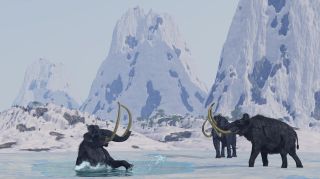 Help! A male woolly mammoth has fallen through the ice of a frozen lake.
(Image: © Catmando/Shutterstock)

Pity the male woolly mammoth: These poor creatures were more likely to meet their end in natural traps — falling through thin ice, tumbling into holes or getting stuck in mudflows — than their female counterparts, a new study finds.

Researchers made the discovery after determining the sex of 95 woolly mammoths (Mammuthus primigenius) whose remains were found across different parts of Siberia. In all, 66 of the specimens (69 percent) were male, while just 29 (31 percent) were female, they found.

The woolly mammoth lifestyle may be the cause of this skewed sex ratio. Inexperienced male mammoths were more likely to travel alone, away from the herd, so perhaps it's no surprise that these males were more likely to stumble into danger and die as a result, the researchers said. [Image Gallery: Stunning Mammoth Unearthed]

But there is an upside to these pachyderms' untimely deaths: Being buried in a natural trap — such as a bog, crevice or lake — tended to preserve their remains for thousands of years, allowing researchers to discover and study them.

"Most bones, tusks and teeth from mammoths and other ice age animals haven't survived," study researcher Love Dalén, a professor of evolutionary genetics at the Swedish Museum of Natural History, said in a statement. "It is highly likely that the remains that are found in Siberia these days have been preserved because they have been buried, and thus protected from weathering."

The discovery is part of a larger, long-term project researchers are undertaking to study the genomes of woolly mammoth populations. Some of the analyses required knowing the sex of the mammoths, and the results were unexpected, the researchers said.

"We were very surprised because there was no reason to expect a sex bias in the fossil record," lead study researcher Patrícia Pečnerová, a doctoral student of bioinformatics and genetics at the Swedish Museum of Natural History, said in the statement. "Since the ratio of females to males was likely balanced at birth, we had to consider explanations that involved better preservation of male remains."

The findings suggest that, like modern elephants, woolly mammoths had matriarchal hierarchies. As such, mammoth herds of young and female mammoths were likely led by an experienced adult female, the researchers said. Male mammoths, also like modern elephants, likely lived in bachelor groups or spent time alone, engaging in risky behavior, they said.

"Without the benefit of living in a herd led by an experienced female, male mammoths may have had a higher risk of dying in natural traps," Dalén said.

This discovery — that seven of every 10 mammoths found in natural traps were male — sheds light on the socioecology and behavior of these extinct animals, the researchers said. It's also a reminder that uncovered specimens don't necessarily represent a random sample of a species, they noted.

The study was published online today (Nov. 2) in the journal Current Biology.