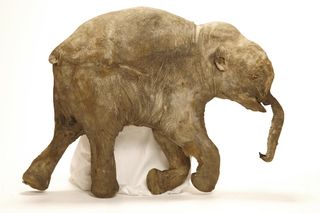 CT scans have revealed that an exquisitely well-preserved baby mammoth from Siberia (named Lyuba and shown here) died after choking on mud more than 40,000 years ago.
(Image: © University of Michigan Museum of Paleontology)

The frightening last moments of two baby mammoths that died thousands of years ago are now being revealed, thanks to CT scanning.

The 1- and 2-month-old woolly mammoth calves, which were discovered in different portions of Siberia, choked on mud after falling into water more than 40,000 years ago, new research suggests.

The mud was like a "really thick batter that they got clogged in their trachea and they were unable to dislodge by coughing," said study co-author Daniel Fisher, the director of the University of Michigan Museum of Paleontology. "It basically prevented them from taking them another breath." [See Images of the Baby Woolly Mammoths]

Woolly mammoths, close relatives of modern-day elephants, arose about 5.1 million years ago in Africa and went extinct about 10,000 years ago. Though scientists don't know for sure why they disappeared, warming weather and overhunting by humans may have doomed the shaggy beasts. During the last ice age, between 110,000 and 12,000 years ago, however, they roamed throughout Eurasia and North America.

The 1-month-old calf mummy, named Lyuba, was discovered in 2007 by a reindeer herder on the banks of a frozen river on the Yamal Peninsula in Siberia. Lactic acid-producing bacteria had colonized Lyuba's body, essentially "pickling" her and making her unappetizing to would-be scavengers, Fisher said.

A mammoth-ivory hunter found the second mummy, which researchers named Khroma after the river in Yakutia in which she was found, frozen upright in permafrost. Scavengers — possibly Arctic foxes and ravens — devoured Khroma's heart and lungs, as well as parts of the trunk and skull, between the time she was discovered in 2008 and the time scientists could retrieve her body, Fisher said.

Each of the mummies still had a distinctive neonatal line on their teeth, a dark line that forms during birth, because the stress of delivery temporary halts tooth development. By counting the tooth growth layers after the neonatal line, the team estimated that Lyuba was about 1 month old and Khroma  2 months old at death, Fisher said.

The team got permission to perform computed tomography (CT) scanning, as well as some limited dissection of the body. [Image Gallery: Stunning Mammoths Unearthed]

Lyuba (which means "love" in Russian) was plump and healthy at death.

The scans also revealed that just before death Lyuba had inhaled bits of mud typically found at lake bottoms.

She also had signs of a response called the mammalian dive reflex, reflected in high levels of a mineralized form of iron phosphate in her face and brain tissues. When facial skin and muscles are exposed to cold water, particularly in babies, the body prepares for oxygen loss by shunting more blood circulation from the heart to the brain. This reflex allows the brain to survive longer without oxygen when the body is submerged under water. The iron phosphate formed over the months and years after her death when phosphate leached from her bones and mixed with iron in her blood.

The analysis paints a terrifying picture of Lyuba's last moments. The baby mammoth was likely crossing a frozen lake with her mother when she crashed through the ice and did a "face plant," into the muddy lake bottom, Fisher said.

She then got mud stuck in her airways and tried to blow it out of her trunk. Because the nasal passages narrow in the trunk, she only managed to get the mud stuck even more.

"It moved straight into her trachea and bronchi and by that time she was too exhausted and couldn't clear her airway," Fisher told Live Science. "It was just a matter of minutes before she would have lost consciousness."

Khroma was also healthy when she died, with a belly full of undigested breast milk that looked like fresh yogurt.

Because Khroma was partly eaten, researchers have to do more speculation to understand her death, Fisher said.

But Khroma had a broken back and mud from a fast-flowing river in her trachea.

So it's possible Khroma was standing on a riverbank when it collapsed, leading her to fall, break her back and be buried in a slurry of mud that she inhaled while trying to extricate herself, Fisher said.

In addition to painting a grim picture of the mammoth calves' last moments, the research also provides some insights into how they developed.

For instance, Khroma's brain was smaller than a newborn elephant's brain, suggesting mammoths may have had a shorter gestational period than modern elephants, Fisher said.

The findings were published July 8 in the Journal of Vertebrate Paleontology.